Carlin’s Japanese driver, Yuki Tsunoda discusses what he thinks was a messy weekend and how he can push at the next race weekend.

In the opposite side of the garage Yuki Tsunoda was more focused on his performance on the track during the race and the type of strategy taken.

“In free practice, we had a wet track but not wet enough for rain tyres but too wet for dry tyres. We didn’t want to destroy a set of rain tyres, so we stayed in the pit waiting for the conditions. We did not run at all in free practice.

Then in qualifying it was wet, and in the first three or four laps, the pace was really good, and I was like, top three always. Then we went to the pit quite early compared to the others to change the new tyres.

Most of the cars stayed on track and then improved their times after I went to the pits. So finally, I was P13.” said Tsunoda.

The Honda and Red Bull driver was flying in the feature race until he needed the first of his wing’s;

“For race one, I went with completely the opposite strategy to my teammate. We had the option tyre and the prime tyre, the normal one. We couldn’t expect what happened, but the track was much faster in the beginning, and though I gained a little bit of positions, it was not enough.

We went to the pit box to change to the prime tyre straight away, quite early. After the change, the pace was OK, and I tried to overtake the car in front, P15 and I touched my front wing. There was quite a lot of white dust from the treatment of the oil on the track, and I couldn’t see exactly the car ahead as he turned when I was inside.

I lost my front wing and had to go to the box to change. After that, I had a really strong pace, so it was a real shame that we were so far back.”

The Japanese driver was again in the pits as he needed a new front wing following contact. This ultimately compromised his race position but looks now towards the next race weekend;

“For race two I started with the prime tyre, and we expected to gain as much positions as possible early on going on the experience from Saturday when it was hard to warm the option tyre, especially int the first three laps.

But today it was not the same advantage, I was able to gain some positions, but I touched my front wing a little in turn one after the start, and though it wasn’t as bad as yesterday the FIA decided to orange board me and I had to pit to change the front wing again. We changed to the option tyre, but there were 20 laps left, and that was too long.

Still, the pace was OK, and I did what I could, driving the option tyre to the end. It was a very messy and disappointing race weekend for me. We have a bit of a break to Silverstone, so I have to reset my mentality and condition, then focus forward.”

Both Carlin drivers will hope that the week off will give them time to return to form so they can return to the doubleheader in Silverstone with some good results. 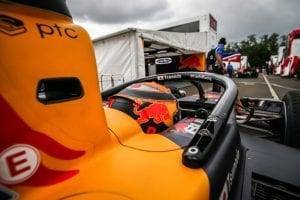