Campos Racing’s Ralph Boschung topped a prematurely ended free practice as he returned from injury at Round 11 of the 2022 FIA Formula 2 season in Belgium.

Home driver Amaury Cordeel was second fastest, in a session where many drivers failed to achieve many meaningful laps.

Race control chose to bring the session to a close with five minutes remaining after a second red flag, caused by Enzo Fittipaldi and David Beckmann sliding off at Turn 1.

DAMS driver Ayumu Iwasa had earlier brought out a red flag when he dramatically spun off on the exit of Stavelot corner.

A typical Spa drizzle had kept many cars in the pit lane, waiting in the hope of better conditions, but the weather remained fairly consistent throughout the 45-minute session, meaning only five drivers reached a double figure lap count.

With so little representative running achieved, the battle for pole position this evening will be wide open.

Practice began with a mist in the air and cloudy skies, not unusual at all for Spa-Francorchamps, situated in the Ardennes Forest.

After early installation laps, only four drivers were bold enough to try their hand in the early conditions.

Boschung, Tatiana Calderon, Cordeel and Marino Sato all set lap times, of varying pace, whilst many of the others remained in the pit lane as a drizzle fell on the circuit.

By the time more drivers had ventured out, more than 20-minutes of practice had passed.

The Spa circuit, with its reconfigured barriers and gravel traps, saw Iwasa be the first to fall foul of the amendments to the extremities of the circuit.

Pushing hard out of Stavelot, the 20-year-old lost the rear end of his DAMS car and spun into the gravel, which kept him plenty clear of the barriers.

Iwasa, who has a Feature Race victory and a pole position from the last two rounds, was unable to restart his car, causing the first red flag of the session.

The Red Bull Junior Team driver had been fastest when he spun off, but saw his time beaten by Ralph Boschung moments before the red flag signal was brought up on the TV screens.

Replays however appeared to suggest that the Swiss had crossed the line after the gantry lights had shown red.

Upon resuming the session, following a delay of some seven minutes, all the drivers headed out on to the track with 10 minutes remaining, but any hopes of a meaningful run of laps was curtailed as Fittipaldi and Beckmann both locked up at Turn 1 and ran wide.

Brazilian Fittipaldi returned to the track quick but a delay in Beckmann recovering to the circuit caused race control to fly the red flag’s once more, before bringing the session to an early conclusion with five minutes remaining.

Qualifying for the Feature Race is at 18:30CEST on Friday. 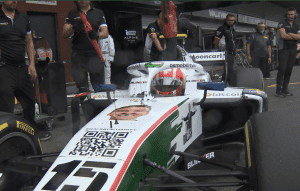