Rewarding Saturday in Jeddah for Trident

Rewarding Saturday in Jeddah for Trident

Trident team manager Giacomo Ricci was encouraged by Trident’s performance on a mixed-up Saturday in FIA Formula 2 but still saw room for improvement at the Jeddah Corniche Circuit, even with both drivers finishing the Sprint Race inside the top six.

The Sprint Race went well for the Italian team, especially for their rookie Calan Williams, as he scored his first championship points at one of the most challenging circuits from the calendar.

Despite dropping back two places from where he started, Williams performed well in his first F2 street circuit racing experience, finishing the race ahead of his more experienced teammate in fifth.

Feeling pleased with the results, team manager Giacomo Ricci still spoke about what went wrong in the race as the podium seemed obtainable for Williams.

He said: “The team prevented Williams from making the mistake of re-entering the pit lane while it was closed and allowed the Australian to take the lead of the Sprint Race.

“At the restart after the safety car, Williams lost some confidence and, from that moment on, started struggling.

“However, I’m delighted to see Calan claim his first points in the FIA Formula 2 Championship and to see him grow so fast, even if I’m sorry for the podium that slipped away from him.”

His teammate, Richard Verschoor, who started his second F2 season with a victory in Bahrain, surprised many in catching up with the Australian’s pace from the ninth position.

The Dutchman delivered a solid performance in the 45-minute session, entering the points-paying positions with a valuable sixth place after beating Ayumu Iwasa at the start. Verschoor currently holds sixth place in the driver standings with 13 points.

Looking back at how hard the Dutchman worked for it, Ricci also feels like it was a great recovery race for him and the team:

“Verschoor had a good race. His start was perfect, extremely clever. It allowed him to lay the conditions for a good recovery and to gain valuable points.”

Following a successful qualifying session, the Feature Race will see Verschoor starting from the front row in P2 tomorrow. 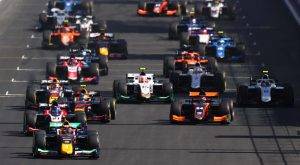