Bookmark this Post Click to Remove Bookmark
Saved: To view visit your Profile Menu.
It’s been an eventful week in the world of Formula One and will likely have a massive impact on the drivers that are on the #RoadtoF1.
Teams are using what would normally be a busy period in a regular-season to make all their strategic decisions for next season before getting this season even gets underway.

With us following the Formula 2 championship and its self-entitled #RoadtoF1 tag line, we would hope to see a graduate or two get their opportunity when the 2021 F1 season comes around.

The gossip columns are full of talk about both the Mercedes and Renault seats, but we want to look at what prospects may be available for the F2 drivers on the grid.

Mercedes have no official junior driver’s as such in the championship currently but with 2019 champion Nyck de Vries and also Stoffel Vandoorne both in Formula-E waiting for openings, this may be the only challenge to 2018 F2 champion George Russell getting his somewhat expected move up to the main constructor team and therefore leaving an empty Williams seat.

If we take that speculative view, we could have either de Vries or Vandoorne take that Williams seat, or what most would expect, see one of the newly assembled Williams reserve and development drivers step into the fold.

Top of the list would be Jack Aitken, The British driver certainly has what it takes in many people’s opinion. He has experience at the sharp end of the F2 grid and would hope that his time has comes to make the move in 2021. This may or may not depend on if he can have some good performances in 2020 with his Campos Racing team.

Other options would be Roy Nissany and Dan Ticktum, however, for either to leap head of Aitken in the pecking order would come as quite a surprise. Their hopes would rest on having a title push in 2020 for their Trident and Dams teams respectively.

Ticktum has shown he has the raw pace in the past with some impressive drives, especially in Macau but maybe he and Nissany would look at their place in F2 as a two-year project.

Jamie Chadwick is also part of the new line up and is an option but its more likely a season in F2 would be the stepping stone required for the W-Series Champion.

The big plot twist at Williams would be an unexpected Nicholas Latifi switch. If he was to have a particularly poor rookie season and lose his possible option for 2021 as the Canadian driver currently only has a one year deal with the team.

Then we have the Renault seat, with the news of Ricciardo moving to Mclaren it now leaves Renault in a tough spot. They have a new driver in Esteban Ocon, so do they go with youth or experience to accompany him?

From the experienced pool they could go back to Nico HÃ¼lkenberg? A solid hand in Valtteri Bottas? Break the bank for the headlines with four-time F1 champion Sebastian Vettel? Or even, a reported move for double world champion Fernando Alonso.

“I think Fernando Alonso’s not someone who wants to come back to Formula 1 and struggle again in an uncompetitive car. He left because he didn’t have one. These guys, they don’t want second rate equipment, they want the best.”

So for a sensational return to the sport for Alonso you could only really consider a Mercedes or Red Bull seat, both look very unlikely to offer the veteran anything.

The climate may dictate proceedings, with all the talk of Covid Economics coming out of the sport’s press maybe they will opt for a slightly more economical option with a young driver. They have two strong options on the Formula 2 grid this year in Chinese driver Guanyu Zhou or Danish driver Christian Lundgaard.

Lundgaard spoke to Danish BT newspaper recently and believes Daniel Ricciardo leaving the Renault could offer him the best chance of a promotion onto the Formula 1 grid.

“Renault expects me to be ready if the opportunity presents itself. Fortunately, I am quick to learn and good at adapting to new surroundings.”

The Dane is a rookie this year and would need some impressive performances to cement any role.
Slightly ahead of him in many eye’s is his fellow Renault Sport Academy driver Zhou. The Chinese driver was the surprise package of 2019 with an impressive rookie season and is now the F1 teams test driver. This make would make him a logical choice, then consider any possible investment that may come with having a Chinese driver in the F1 team. This could be smart commercially for the French team.

One team that loves keep us busy with driver switches is Red Bull, they have three possible vacancies if you include Alpha Tauri.

Alex Albon, Pierre Gasly and Daniil Kvyat are all on the Red Bull merry-go-round which could be predictable with no changes or totally un-predictable with three changes. It is always hard and furthermore foolish to even guess the swift changes that the Austrian team may make. Waiting to get their wings on this year’s grid are Japanese drivers Yuki Tsunoda and Indian driver Jehan Daruvala.

Aston Martin are likely to stick with Sergio Perez as he is a well respected driver and a well respected pot of possible Central American finance. In the other seat we have Lance Stroll, so, you know…

The stateside F1 team feels like it could see some changes in 2021. It is not unthinkable that both seats may come available, this highly dependant on the number of doors that are smashed in post race briefings. Kevin Magnussen has been solid with the car when he has had a chance for points which would suggest he may get another contract.

On the other side of the garage, it feels like it’s just a matter of time for Roman Grosjean which would leave an open seat.

From our Formula 2 pot, Louis Deletraz could be in prime position for that seat given his experience and now his standing in the team as a test driver.

This is where it gets exciting for followers of the junior championships, The Ferrari Driver Academy has a rather long list of driver’s to choose from.

Both Kimi RÃ¤ikkÃ¶nen and Antonio Giovinazzi’s contracts expire at the end of the 2020 season but the latter would be hoping to stick around given his age, however, that is not a guarantee.Â  If that was the case though we would be primed and ready for a 2020 shoot out in the FDA for the one seat.

The stars have always been aligning for a Ferrari and Schumacher reunion at some point but with Leclerc and Sainz currently in the Scarlet car’s for a couple of years at least this could be Mick Schumacher’s chance to move into F1 and learn the ropes before getting all the pressure that would come with the romantic team and family re-union.

The big but here is Schumacher’s form, he has done well but not been electric since his step up from his championship-winning F3 season but he was also only a rookie last time out.

The FDA has some strong candidates if we look elsewhere, British driver Callum Illot is a notable mention, the driver tested for the team last year. If we stick with famous son’s we have another in Giuliano Alesi, Marcus Armstrong is a very highly rated young driver making his way through the categories.

Last but by no mean’s least we can not forget about the 2019 Formula 3 champion, Robert Schwartzman who is not only highly-rated but has almost an expectant reputation of delivering in Formula 2 despite this being his rookie year.

These FDA drivers battling in the 2020 is one of the top attractions of the postponed FIA Formula 2 season and we certainly can not wait to get back on track and see this all unfold.

What do you think on they above opinion? So much speculation about the premier seats and the opinions available from the F2 grid as the drivers continue their own #RoadtoF1. 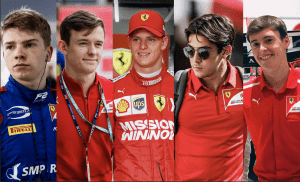