The 2022 season comes with several newcomers, some of which we are already familiar with from other categories. The talent within this group of young men is something to keep an eye out for.

Some young drivers show their potential round after round, regardless of their “rookie” title.

PREMA finished the 2021 season on a high, winning the Teams’ Championship, and Oscar Piastri bringing them yet another victory in the Drivers’ Championship. This year, the team brought a new face to the grid, the most recent Formula 3 Champion, Dennis Hauger. Despite being new to the competition, Hauger has managed to score a podium position at Imola, followed by his maiden win in Monte Carlo. The Norwegian driver is currently a Red Bull Junior. The driver is expected to continue scoring points throughout the season alongside his teammate, Jehan Daruvala.

PREMA alumni Olli Caldwell was promoted to Formula 2 with Campos Racing. Alpine announced in February that Caldwell would be joining their academy. The young British driver shares the team with Ralph Boschung. Caldwell has shown his potential with a number of good overtaking moves this season. His best results were in Imola’s Feature Race, and Barcelona’s Sprint Race, in which he finished 13th.

Frederik Vesti was given the chance to participate in a post-season test at the end of 2021 with the ART Grand Prix team, early in 2022, the team announced that Vesti would be racing in Formula 2 with Théo Pourchaire as his teammate. Vesti has scored points in four races since joining F2, including a podium in Barcelona’s Feature Race. He had a total of 25 points for the season thus far.

Amaury Cordeel joined Formula 2 with Van Amersfoort Racing, sharing the team with Jake Hughes. Cordeel, unfortunately, has not seen many positive results thus far this season, amounting 11 penalty points, meaning he is only one penalty point away from a race ban. The driver’s best position was during Sakhir’s Feature Race, in which he finished 13th. The Belgian driver will be looking for some improvement over the coming rounds.

MP Motorsport brought in young French driver Clément Novalak for the 2022 season. So far this season, his best result came in Imola when he crossed the line in 4th place in the Feature Race. He stands in 15th place in the Drivers’ Championship. Novalak’s teammate is Felipe Drugovich, currently leading the Championship with 113 points. Felipe is in his third season, and Clément may see this as a good benchmark to keep pushing forward in the Championship standings.

Red Bull Junior Ayumu Iwasa is racing for DAMS for the 2022 season. The Japanese driver has scored points on six different occasions this season, positioning himself in 13th place in the Championship. Iwasa’s best drive is easily the Sprint Race in Barcelona where he secured second place. Approaching the sixth round of the season, Iwasa has totalled 28 points after a tough weekend in Monte Carlo. His teammate, Roy Nissany, is three positions behind in the Championship. Overall Iwasa will consider this a solid start to life in F2, having shown good pace on a number of occasions.

Calan Williams drives for the Trident team. Thus far, he hasn’t had the best luck when it comes to scoring points. His highest placed finish was during the Sprint Race in Jeddah, where he crossed the line in 4th place. Williams has only scored five points through the five rounds of the season and currently stands in 18th place in the Championship. Williams’ teammate, Richard Verschoor, has had a better run through the season, winning the first Sprint Race of the season and scoring second place in the Feature Race in Jeddah. Similar to Novalak and Drugovich at MP, Calan will be looking to use Verschoor as an experienced benchmark in the series.

Turkish driver Cem Bölükbasi joined F2 with Charouz Racing System. His luck has been tested this year, while he also had to miss some sessions due to health concerns following a crash in a barrier at Jeddah. Nevertheless, Bölükbasi has improved and looks forward to scoring points in upcoming rounds. His best result was in Monte Carlo’s Feature Race where he finished in 11th place. Bölükbasi is currently in 21st place in the Championship, while his teammate, Enzo Fittipaldi stands in 7th place with 42 points.

Williams Driver Academy’s, Logan Sargeant, joined Formula 2 with Carlin for 2022, and while he has scored 38 points during the season, the American driver believes his pace is better than the results themselves. Sergeant managed to score a podium in Barcelona when he finished in 3rd place in the Sprint Race. Sargeant is only one position behind his teammate, Liam Lawson in the Championship. This pairing looked like one to watch at the start of the season, with both drivers looking very competitive for pace in past championships.

We’ll catch up with the rookies’ progress later in the season, comparing how well they have adapted to Formula 2.

Who do you think will reign supreme and win the Anthoine Hubert Rookie of the Year Award?

Make sure you watch our video of Baku’s Track Guide on our YouTube Channel. 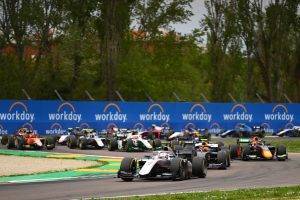