In the Picture: Rosberg and Berger 2005

In the Picture: Rosberg and Berger 2005

Rosberg and Berger in Bahrain GP2 2005 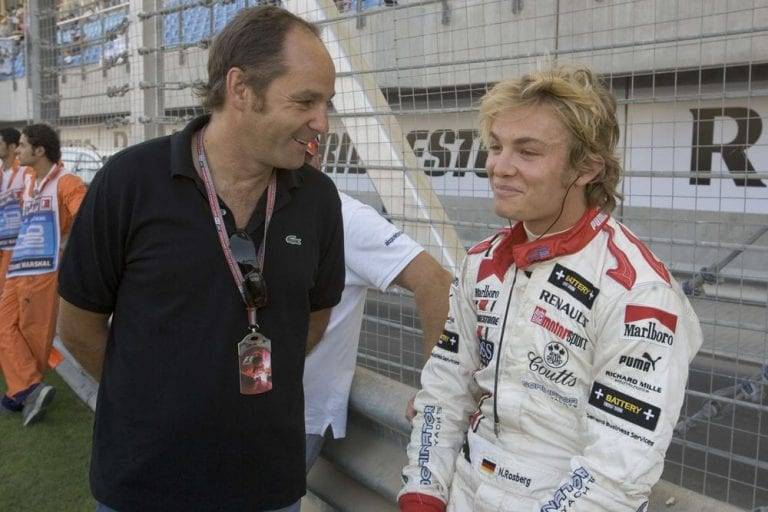 We take a picture from the past and give it some context and if you enjoy these please do share on social media and let us know your thoughts.

Sharing of smiles to break the tension in Bahrain knowing full well that what’s on the line is of huge significance for both men with an F1 seat up for grabs.

2005 was the first season of the then-new GP2 Series, the brainchild of then-F1 Supremo Bernie Ecclestone and then-Renault F1 team principal Flavio Briatore, created to be a cost-effective category replacing the FIA International Formula 3000 Championship which had seen dwindling grid numbers, as the final step to Formula 1 for up and coming junior drivers.

The inaugural season of the championship saw ART Grand Prix’s Nico Rosberg, son of 1982 F1 World Champion Keke Rosberg become the category’s first-ever champion and with it a seat at Williams for the 2006 Formula 1 season; following in his father’s footsteps in joining the fabled British team.

Rosberg, carrying a surname that had triumphed in F1 23 years prior would take several years to jump up the single-seater ladder to reach GP2 in 2005. Having graduated from the Formula BMW ranks under the BMW Motorsport Junior Programme, he moved up to the Formula 3 Euro Series in 2003 and 2004 racing for his father’s eponymous team.

The two seasons in Formula 3 with Team Rosberg (and for two major Formula 3 races in 2003, Carlin Motorsport) yielded decent results but not quite enough to win the championships or the said major races. The 2004 Macau Grand Prix, however, saw Rosberg crashing out of the race that also collaterally took out a certain Lewis Hamilton, costing both drivers a shot of a win at the biggest Formula 3 race of all.

Macau gaff aside, Rosberg graduated to the GP2 Series for 2005 driving for the new ART Grand Prix team headed by future Sauber team principal FrÃ©dÃ©ric Vasseur and Nicolas Todt, son of now-FIA president Jean Todt; which enabled him to challenge for the title and enjoyed his strongest season since his 2002 Formula BMW ADAC triumph.

Rosberg, however, had to wait until the 5th round of the season at Circuit de Nevers Magny-Cours to claim his first win of the season in the Sprint Race (where he also could’ve won the Feature Race) before winning the next two Feature Races in the next two rounds to aid his championship aspirations. He continued to finish consistently in the Top 5 in the remaining races (barring one non-score) before the finale in Bahrain.

The stand-alone event in Bahrain couldn’t have gone any better for Rosberg as he had the perfect weekend starting with a pole position to give him 2 bonus points and increasing his championship lead over title rival Heikki Kovalainen. Rosberg duly went on to win both races (a first for the series at that time) and securing the title emphatically. Rosberg was now primed and ready to tackle Formula 1.Â

In fact, prior to his GP2 triumph, Formula 1 opportunities were aplenty for Rosberg. As early as May 2005, Rosberg had already been signed on by Williams as their 2nd test driver and he even tested for the team all the way back in 2002 coinciding with the Formula BMW ADAC title win that year. For Rosberg, signing for Williams was a no-brainer given his Williams and BMW connections allied to his GP2 Series triumph.

And here is where Gerhard Berger comes into the picture, as the former F1 Grand Prix winner’s work behind the scenes would help shape Rosberg’s F1 career. The Rosbergs and Berger go way back in their partnership to when Berger was the Director for BMW Motorsport, the latter helped set up the junior Rosberg’s 2002 Williams test.

Berger himself had been a proponent of BMW for years, having driven in the Bavarian marque’s cars or driving in cars with their engines in the early part of his career. He started in touring cars before racing in junior single-seaters with some success. It was during 1984 when he was racing in the German Formula 3 Championship that he caught the eye of notoriously volatile ATS owner GÃ¼nter Schmid.

Schmid had acquired BMW engines for his F1 team in 1984 and was keen on giving Berger the drive. After some support from BMW (and paying ATS in the process), Berger made his F1 debut in at his home race in Austria of that year, finishing 12th. It was a promising debut for Berger and it went even better for him in the next round by finishing 6th at the Italian Grand Prix.

However, he wasn’t eligible for points due to ATS having officially committed to the season with one car, making his entry in the second car essentially a ‘wildcard’ entry. He had a DNF in the following European Grand Prix before rounding off the season with a 13th in Portugal. Unfortunately for Berger, ATS pulled out of F1 after losing the BMW engine supply and he had a horrifying road accident during the post-season which he fully recovered from.

Berger signed for Arrows for 1985 and in turn allowing him to stay in F1. The team were also supplied by the same BMW engines that he drove with ATS the year before. The chassis was sadly lackluster and Berger finished 20th in the standings with a 5th being his best result. 1986, however, was when his F1 career finally took off, driving with Benetton where he took a famous win in Mexico, the first of 10 in his career.

He then embarked on a Ferrari-McLaren-Ferrari journey where he acquired 8 more wins, establishing himself as a front-running driver before rejoining Benetton in 1997 to end his career with one more Grand Prix victory. After F1, Berger made the return to BMW as Motorsport Director in 1998. His leadership saw BMW win at Le Mans in 1999 and orchestrated the marque’s return as an F1 engine supplier in 2000 amongst others.

Berger left his position at BMW in 2003, but not before laying the foundations of how he helped shaped Nico Rosberg’s career prior to his GP2 triumph. In 2002, he introduced the Formula BMW category, which Rosberg raced and won in the ADAC championship that year. In his capacity, he also helped Rosberg land the test drive at Williams later that year. Thus putting Rosberg on the radar once he was in GP2.

What happened after this picture?

Post-Bahrain 2005 saw Rosberg start his career in F1 which will last 11 seasons and a world championship title to his name while Berger already parted ways with BMW by then and in turn, BMW also parted ways with Williams after a 7-year partnership (including the 1999 test car) and joined forces with Sauber to form BMW Sauber. The Rosberg and Berger partnership was still there even after 2005.

Rosberg scored 2 points and the fastest lap on his debut in Bahrain with four more points in the season to finish 17th. In 2007 he scored 20 points where he finished 9th in the standings, a year later he achieved his first podium at the opening round in Australia before achieving a career-best finish of 2nd in Singapore. The following season he was consistently in the points to finish 7th. He then moved to Mercedes for 2010.

Rosberg’s reputation as a top-line driver was sealed when he was with Mercedes where he outright beat 7-time F1 World Champion Michael Schumacher in the 3 seasons they were together. Rosberg then had childhood friend turned rival Lewis Hamilton join in 2013 where the two had memorable title battles that reached its peak in 2016 with Rosberg becoming World Champion, emulating his father in the process and retired.

It was during his years at Mercedes was where Rosberg had Berger present to help him with contract negotiations in regards to extensions, salaries and the like. All the while Berger was also still heavily involved in motorsports where he had a 50% share in Scuderia Toro Rosso (selling back in 2008) and establishing Formula 4 in his time as President of the FIA Single Seat Commission (leaving in 2014).

Both Rosberg and Berger are now enjoying other ventures outside of the Grand Prix paddock, with Rosberg doing various ambassadorial work with a wide range of companies while Berger is currently the chairman of ITR; the promoter of DTM and still doing plenty of work there. The snapshot in Bahrain in 2005 was taken at a time when pieces of the puzzle were coming together very nicely for both parties. 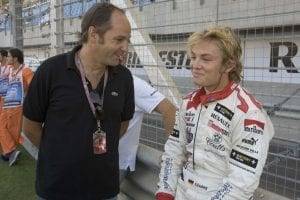