It was the perfect start to the season for Brit Callum Ilott as he took his first victory in F2, ahead of Marcus Armstrong and Robert Shwartzman.

Chinese driver Guanyu Zhou looked set to take a dominant race win before car trouble forced him down the field.

One hour, 40 laps, in the glorious Austrian sunshine.

Luca Ghiotto suffered an issue pre-race before getting to the grid, with his Hitech car disappointingly not starting the race.

As the cars started the formation lap, Marino Sato couldn’t get off the line and retired immediately.

Ilott took the lead from Zhou on the run into Turn 1. They battled side-by-side through the first few corners and Zhou snatched the lead back before they crossed the line to complete the first lap.

Jehan Daruvala spun on Lap 1 after being tagged from behind by his Carlin teammate Yuki Tsunoda, with the Japanese driver being awarded a five-second penalty for the incident.

Daruvala’s rear wing was damaged. After starting in 13th he’d dropped down the order to 18th by Lap 9.

The opening laps were frantic, with Dan Ticktum and Nikita Mazepin tussling for seventh place, while Tsunoda was already a lap down by Lap 6 after stalling in the first of the pit stops.

Sean Gelael retired in his DAMS car on Lap 7 with a technical issue. Shwartzman successfully moved up to fourth place after eight laps of trying to get past Drugovich.

Zhou was the first of the frontrunners to pit on Lap 18 and was followed in the next lap by UNI-Virtuosi teammate Ilott. It was Ferrari youngster Ilott who came out ahead of Zhou, although both were jumped by Schumacher as the German came in for his stop a lap later.

As they chased down Schumacher, Zhou got the better of Ilott into Turn 3, and quickly turned second position into first with a move on Schumacher.

Ilott was all over the back of Schumacher but still couldn’t find a way past. All this played into Zhou’s hands as he romped away into the distance, but it wasn’t long before Ilott found his way past the PREMA.

Behind this battle Shwartzman was pushing Armstrong to the limit. The Kiwi looked the stronger of the two as his tyres seemed to suit the car better.

The race then took a massive twist as Zhou suffered a devastating issue in his UNI-Virtuosi car on Lap 26. He slowed on the start/finish straight and dropped down the order, allowing Ilott to inherit the race lead.

The polesitter was able to rejoin the race after a trip to the pits, but his challenge for points was over.

Almost simultaneously, Artem Markelov retired on Lap 28. He pulled off the track and his stricken car triggered the deployment of the safety car.

On the restart, Schumacher had an opportunity to attack for the race win. However, he made a mistake in the middle sector and took a trip through the gravel trap. Going too deep at the Würth Kurve, Schumacher lost the rear of the car and dropped to 13th.

Schumacher’s mistake gave Ilott the chance to break free of the pack. It was an opportunity he grabbed with both hands as he roared into the distance to take the race win.

Shwartzman hounded the back of Armstrong’s car as they battled for second place. Christian Lundgaard closed in on both of them, but Armstrong was able to hold them off.

On the final lap Ticktum joined the back of this battle and tried everything he had to take fourth place. It was too much to ask on worn tyres for the DAMS star, but his potential was obvious.

Giuliano Alesi’s strategy played out well for him, with a solid sixth place following a difficult qualifying session.

The start of the 2020 Formula 2 season was a long time coming, and well worth the wait! 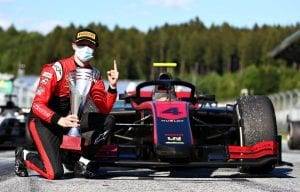