Felipe Drugovich took a dominant victory in the Sprint Race on debut with a superb performance in Austria.

The Brazilian rookie led every lap as he continued his impressive first weekend with MP Motorsport in Formula 2.

Louis Delétraz and Dan Ticktum joined Drugovich on the podium in a race full of incident and safety cars.

Having disappointed in F3 last year, not much was expected of Drugovich ahead of this weekend. However, he has proven the doubters wrong, showing great pace all weekend.

“It was really perfect. It was also quite difficult because of the restarts all the time, the gap I opened up was closed again so I had to open it up again,” Drugovich told Sky Sports F1 after the race.

“It was hard, a lot of pressure because of the DRS. I had to keep them one second back to keep them out of DRS. I was pushing every lap and now I am so happy,” he added.

“Yesterday we didn’t have the result we wanted but now I’m so proud of the team, I’m really happy.”

Drugovich began the race on reverse grid pole and led the field away on the first lap.

Marcus Armstrong made a great start and moved up to third with a superb double overtake at Turn 4.

Having started third, Giuliano Alesi slowed as the pack crossed the line for lap two with engine issues. The Italian had been set for a good result but stopped on track, bringing out the safety car.

Drugovich pulled away from the pack at the restart but the safety car was soon back out again.

Carlin debutant Jehan Daruvala ran into the back of Luca Ghiotto, completing the Italian’s nightmare weekend as he had to retire.

At the second restart Armstrong quickly suffered a loss of power, ruining his chances of another podium.

The Kiwi’s car ground to a halt on track, causing a third safety car of the day.

For the third time, Drugovich nailed the restart ahead of Delétraz to hold the lead, with most of the battling occurring for the lower points places.

With three laps to go the German attacked once again, but the overtakes were happening behind him.

The Brit quickly closed in and got the move done into Turn 3, moving into eighth and the final points position.

Robert Shwartzman just missed out on a second debut podium, finishing fourth, ahead of Christian Lundgaard in fifth.

Matsushita held off Schumacher and Aitken resisted a final lap counter-attack from Ilott to take his first point of the season.

Ilott leads the championship after Round 1, ahead of Shwartzman and Drugovich.

And F2 is back in Austria next week, where we get to do it all over again! 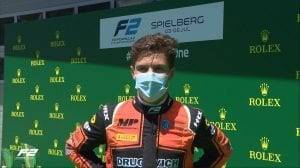