With the first round of the 2022 season behind us, we look at each driver’s performance and give ratings out of 5 stars.

Dennis Hauger *****
A modest first race weekend which ended up worse than it could have been due to an unfortunate incident with his wheels in the pit lane.

Jehan Daruvala *****
He had to work hard for a podium in the Sprint Race but he was off the pace in the Feature Race even before the pit lane confusion.

Jack Doohan *****
High expectations, increased by his superb pole position, and then a lack of pace on Saturday and a mistake on Sunday which cost him points.

Marino Sato *****
Should have taken advantage of the first round to score points before the rookies get up to speed, but his experience didn’t help him out this time in what is considered a strong team.

Liam Lawson *****
Very consistent and always near the front between him and Pourchaire, it will be a fight to the end of the season if this weekend taught us anything.

Logan Sargeant *****
Very positive début weekend for the American rookie, with double points-finishes. He will be looking to deliver this level of consistency all year.

Marcus Armstrong *****
Wherever he goes, the New Zealander brings the bad luck with him: he became the season’s first retirement. However, an excellent Feature Race would have given him confidence. Hopefully, he gets to show more of his talent this season and less of the bad luck.

Juri Vips *****
Had an average Sprint Race, however, a stellar Feature Race was compromised by a pit stop mistake. He led comfortably, and even afterward he made an incredible comeback to take the podium.

Frederik Vesti *****
Understandably overshadowed by his teammate, retiring after an unforced error in the Feature Race, he won’t be delighted with his weekend and will look to improve next time around.

Théo Pourchaire *****
On course for a podium in the Sprint Race, the Frenchman had to deal with unreliability. Despite that, he leads the championship thanks to a great performance on Sunday which he inherited following Vips’ pit troubles.

Felipe Drugovich *****
Two top-sixes show how the Brazilian-Dutch pairing just works. As this is only the first weekend of the season, there is much more yet to come.

Clément Novalak *****
Strangely still off the pace as he was in the final races of 2021, Novalak will be looking to turn his form around for Round 2.

Olli Caldwell *****
Racked up seven penalty points in the Feature Race alone for track limits violations and an SC offense.  Hopefully when returning to a track he knows, Jeddah, he will perform to his own high standards.

Ralph Boschung *****
The F2 veteran has accustomed us to punching above his car’s weight, but we should not underestimate the worth of his performances each time he does so. Several GP2 championships were won this way.

Roy Nissany *****
The Israeli is finding himself more often involved in hard-fought battles on track, but his aggressiveness paid out this time without being over-the-top.

Ayumu Iwasa *****
Qualifying seemed to hint at a learning weekend for the young Japanese driver, but the races indicated that the Red Bull junior is already confident in his DAMS. Two exceptional drives were hampered by a technical problem at the end of the Feature Race.

Richard Verschoor *****
From being the last confirmed driver to being the first race winner of the season, Verschoor never put a foot wrong in the Sprint Race and his pace was such that he had little defending to do.

Calan Williams *****
Close to his teammate in qualifying, his Sprint Race came undone quickly due to a lack of pace. He was on course for excellent points in the Feature Race when a pit crew error forced him to retire.

Enzo Fittipaldi *****
Outperformed by some fellow rookies, this was not the best weekend Fittipaldi could have hoped for, but he came close to the top ten and will no doubt score points sooner rather than later.

Cem Bölükbasi *****
He stayed pretty close to his teammate throughout both races, not bad at all for a rookie.

Amaury Cordeel *****
Off the pace in qualifying, he matched his rivals’ pace in the races even though he still stayed near the back of the field. 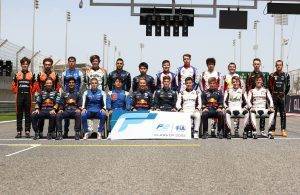