Round 11 welcomed us back to the 2022 Formula 2 season after the summer break. We look at each driver’s performance and give ratings out of 5 stars.

Dennis Hauger *****
Bad luck conditioned Hauger’s weekend in Spa-Francorchamps, with the Norwegian finishing both races near the back of the top ten but ultimately not scoring any points.

Jehan Daruvala *****
After not starting in the Sprint Race, damage forced him to pit in the early laps in the Feature Race and his race was over as soon as it started, leading the once-consistent Indian to a second consecutive round with zero points, the same as his team.

Jack Doohan  *****
Doohan’s stellar weekend deserves him five stars for being close enough to perfection. With a second place (from P7 on the grid) and a win (from P4 on the grid) to take his first Feature Race triumph he sent a warning to his rivals: Drugovich might be too far ahead, but runner-up in the Championship is still possible.

Marino Sato *****
A weekend spent in the midfield for the Japanese driver, who never looked set to trouble the points-runners in either race.

Liam Lawson *****
After a mediocre weekend in Hungary, Lawson returned to the top step of the podium in Spa with a recovery drive from fifth on the grid. He capped the weekend off with another hard-fought podium that places him within a distant but feasible shot of taking the runner-up spot in the Championship.

Logan Sargeant *****
Sargeant’s last few races have been littered with DNFs and another one came in Belgium, due to a mistake. Starting third in the Feature Race, he dropped off the podium but still scored solid points with fifth place to remain Pourchaire’s closest rival.

Marcus Armstrong *****
Armstrong was unable to repeat his Saturday result the day after, and some poor wheel-to-wheel racing on his side, which saw him collect a penalty for contact with Hauger, dropped him out of the points.

Juri Vips *****
A mistake in qualifying left him last on the grid for both races, but Vips pulled off two recovery drives, one decent and one excellent, the latter promoting him to eighth in the Feature Race.

Frederik Vesti *****
Unexpectedly, Vesti’s weekend was lacklustre as he was nowhere near his team mate and unable to take points off his rivals.

Theo Pourchaire *****
Qualifying remains Pourchaire’s weak point, but starting third on the reverse grid only yielded a sixth place. Together with Sunday’s retirement due to technical troubles, that’s a lot of points lost to his championship rival.

Felipe Drugovich *****
The Brazilian showed his mental form on Saturday when, running inside the points-paying positions, he pitted during a Safety Car period to try and pass on better tyres, which he did. On Sunday he lost out to Doohan thanks to Virtuosi’s strategy, but finished second and added plenty of points to his own tally.

Clément Novalak *****
Solid work in the Feature Race meant Novalak could celebrate some more points, a day after a poor Sprint Race saw him finish 17th.

Lirim Zendeli *****
Back in F2 after a year out, Zendeli’s contribution to Campos was impalpable, and he drove on par with the driver he was replacing.

Ralph Boschung *****
Fastest in practice, tenth (reverse pole) in qualifying and on the podium in the Sprint Race: a positive return to racing for Boschung after his injury, at a demanding track to top it off.

Roy Nissany *****
Anonymous throughout the weekend, Nissany was unable to score points in Spa. He’ll try again next week to return to his early-season form.

Ayumu Iwasa *****
A worse weekend than his previous two when he stood on the podium twice, but in both races he finished in the top ten, therefore a decent result.

Richard Verschoor *****
Verschoor’s exploits are impressive on their own, but become even more so when considering how often he is managing to show such pace and how it’s not a matter of making a good getaway and defending for the rest of the race, but actually fighting against quicker cars and more experienced drivers throughout the races.

Calan Williams *****
One of Williams’ worst weekends of the last few months, results-wise; the difference to his team mate is increasingly obvious.

Enzo Fittipaldi *****
A bit of a messy weekend but Fittipaldi was clearly pushing his car to the limit on the Spa-Francorchamps circuit. He qualified second but fell out of the points after Saturday’s reverse-grid Sprint Race; he then battled with the frontrunners in the Feature Race but dropped to only tenth place after a penalty.

Tatiana Calderon *****
Almost three years she had been away from F2, so it’s not easy to get back to terms with the car. Still, she has been driving superior cars in Super Formula and IndyCar, and as she scored no points in her previous season in F2, a little step forward could have been expected. Her pace was not promising, but her learning curve should be very steep and we should see progress in the next two back-to-back rounds already.

David Beckmann *****
Replacing Hughes at VAR must not be an easy job because of the difficulties in driving that car and how the Briton managed to put in some stellar performances while driving it. Indeed, Beckmann had replaced him without success before the summer break when Hughes caught Covid. Now certain of his future at the team until the end of the season, the German placed his car where it did not deserve to be and fought for a podium for good part of the Feature Race, eventually going on to score points in both races.

Amaury Cordeel ******
New team mate, same fate for Cordeel as he was the trailing driver at VAR despite almost topping free practice at his home track. 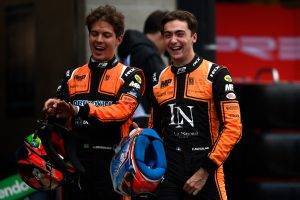