The championship appears to be a done deal as Drugovich’s rivals failed to recover ground on him in Zandvoort’s round. We look at each driver’s performance and give ratings out of 5 stars.

Dennis Hauger *****
Hauger showed a decisive pace in both races and came close to securing a double podium. In the end, considering how the season has gone so far, this was one of his best weekends.

Jehan Daruvala *****
Seventeenth in qualifying meant another weekend thrown away before it even started, but at least he stayed out of trouble during the Feature Race to climb up the order and take a single point.

Jack Doohan  *****
Unable to make progress in the Sprint Race, Doohan was on course for a podium and, perhaps, a win, when he was hit behind the Safety Car and retired.

Marino Sato *****
Another weekend was spent at the back of the field, as Sato is unable to replicate Doohan’s form. An unfortunate incident with his wheels took him out of the feature race.

Liam Lawson *****
Although he now has a realistic chance of taking third place in the standings, Lawson’s weekend was bittersweet as the Safety Car condemned him to drop out of the points once he made his pit stop on the reverse strategy.

Logan Sargeant *****
Yet another retirement (his fourth in the last seven races), this one dictated by his eagerness to recover ground after a mistake at turn 1. In the end, one point across the weekend and his mid-season form has slipped away.

Marcus Armstrong ******
From second place to a winner in the Sprint Race, Armstrong used his experience to beat rookie Novalak to take his third win of the year. Despite this being his most successful season in F2, he only lies tenth in the Championship.

Juri Vips *****
Quietly putting his car in the top ten in qualifying and in the points in both races, Vips has been somewhat consistent in the last few rounds but unable to put in a remarkable performance to avenge his lost chances earlier in the season.

Frederik Vesti *****
Vesti’s results after the summer break have been a bit of a struggle for the young driver, not the weekend he would have hoped for. He’s dropping back down the order in the standings after a period of climbing up. We are sure he will be looking to finish the next couple of rounds on a high prior to thoughts of next year.

Theo Pourchaire *****
A costly error relegated him to 16th on the grid: the French driver is rubbing salt into the wounds of his battle with Felipe Drugavich.  Neither race allowed him to show his potential.

Felipe Drugovich *****
Perhaps for the first time this year, Drugovich was unable to compete with his rivals in the Sprint Race and finished where he started. He duly won the Feature Race from pole position, aided by mayhem during the Safety Car period.

Clément Novalak *****
Finally, on the podium in F2, Novalak looks like he may have turned a corner personally with the F2 car and we look forward to seeing these performances more regularly as he no doubt looks to becoming a points-contender next season.

Olli Caldwell ******
Another low-key weekend as the young Brit looks to find his feet in F2. Didn’t seem to maximise the potential of the car this weekend and no doubt will look to push on in the next round.

Ralph Boschung *****
Boschung’s weekend was unexpectedly quiet after taking a podium the weekend prior. We have come to expect him in the mix for points and podiums, however, potentially he is still working on managing his injury following his return.

Roy Nissany *****
The Israeli has become the third driver to be excluded from competing due to excessive penalty points. He is not a rookie like Caldwell and Cordeel, and the manner in which he picked up his last, decisive points was not really expected from  of someone with such experience.

Ayumu Iwasa *****
Another podium for the young Japanese who definitely needs a seat at a top team next year to become a title contender.

Richard Verschoor *****
In the points for the fifth consecutive race, and topped off with a podium on home soil, Verschoor’s performances are now simply unbelievable.

Calan Williams *****
Eleventh place in a Trident is a very good result, but if his team mate is showing the true potential of the car then it does not reflect well on Williams. The truth is somewhere in the middle.

Enzo Fittipaldi *****
Continuing on from Spa, another inconsistent weekend for the otherwise super-consistent youngster. Fifth place is still an excellent result and he may make up some positions in the Championship, too.

Tatiana Calderon *****
Two retirements in two races on your second weekend back are not ideal, however, a return to the car may take a round or two to see her full potential.

David Beckmann *****
The accident behind the Safety Car was clumsy in what would otherwise have turned out to be a good race.

Amaury Cordeel *****
A sensational result for Cordeel as he not only scored his first points, but did so with an excellent sixth place. Considering he started a career-best twelfth on the grid, this was not simply down to luck but he showed a clear step up in performance compared to previous weekends. 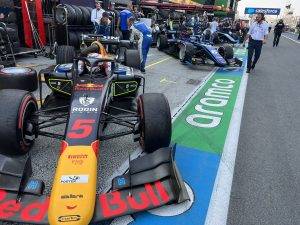