The title was sealed in Monza but everyone still has lots of reasons to finish the season on a high, so let’s see how well each driver did the past weekend. We look at each driver’s performance and give ratings out of 5 stars.

Dennis Hauger *****
A decent showing by Hauger across both races, especially during the Feature Race when, in a race of attrition, he managed to finish in fourth place.

Jehan Daruvala *****
Two podiums on the same weekend is something the Indian hadn’t managed to do before this year, and it puts him within a chance of taking third place in the standings in Abu Dhabi. In what are likely to be his final races in F2, going out on a high is important.

Jack Doohan  *****
Apart from starting in first position, the Feature Race brought no other joys to the Aussie: issues on the formation lap and at the restart left him in the middle of the pack and vulnerable to accidents. Indeed, he was out after a couple of corners after contact with Sargeant. He showed his speed, however, something very crucial at a time when Alpine are said to be eyeing him up for an F1 seat.

Marino Sato *****
The other Virtuosi driver had a golden chance of scoring points in the Feature Race, given how many retirements there were, simply by staying out of trouble with his experience; however, he missed the opportunity.

Liam Lawson *****
In the past few race weekends Lawson has demonstrated excellent pace, but luck has played against him on a few occasions. It did in the Feature Race, when he had to pit under Safety Car after everyone else behind him had managed to do so a lap earlier; further misadventures with Vips put him out of the points for good.

Logan Sargeant *****
The crash at turn 4 in the Feature Race is definitely not a matter of bad driving, but Sargeant’s string of retirements continued at Monza and is making life difficult for him as he tries to remain third in the championship. Perhaps the rumours of being in contention for a seat at Williams are distracting him, but these should be sorted out by Abu Dhabi and with a clean weekend he can manage his advantage to finish the season in P3.

Marcus Armstrong *****
Armstrong showed good race pace but also too many errors and a tendency to fall back after a string start. For example, his last-second attempt to pit during the race saved him time but cost him much more through penalties. With a clearer mindset, he should have made the decision to stay out.

Juri Vips *****
After all that’s happened to Vips this year, it seems ages ago when he was starting races on pole and crashing out. This time, he finally won a race in 2022 by starting third in the Sprint Race, after demonstrating unmatchable speed.

Frederik Vesti *****
After a few races below his standard, Vesti delivered his strongest weekend in F2 with two second places. He lost the win from reverse pole, but such a performance surely lines him up as one of the title favourites for 2023 if he remains in F2 with a top team.

Theo Pourchaire *****
Pourchaire was realistically not going to salvage the championship in Monza but the extent of his defeat was symptomatic of everything that went wrong with his title assault this year. Poor qualifying, again, was the main culprit, and an accident caused by Boschung the consequence. Scruffy racing and not enough pace to recover positions and make it to the points sealed the job for Drugovich.

Felipe Drugovich *****
Qualifying went well, if not for a penalty which relegated him to 12th. Knowing he had nothing to lose, the Brazilian went on the attack but was out of the Sprint Race on lap 1 after contact. His advantage in the championship was enough to seal the title for him, though. In the Feature Race he recovered to sixth, staying out of trouble which involved his main rivals, showing yet again how clean he has been all season.

Clément Novalak *****
More points for Novalak in Monza, highlighting his growth in the last few weekends. Keeping this up in 2023 should make him a regular contender for points.

Olli Caldwell *****
Caldwell and Calderon’s best chances of scoring points are staying out of trouble, but making contact at the back of the pack is completely unnecessary. He was then a victim of a crash triggered by his team mate in the Feature Race, so that’s two retirements out of two.

Ralph Boschung *****
Like his team mate, Boschung retired twice due to two collisions. The second one was clearly his fault, as he rejoined the track and moved towards Pourchaire, hitting him. Definitely something below his standards and unworthy of his experience.

Luca Ghiotto *****
A second off rookie team mate Iwasa in qualifying was hard to swallow but expected, after two seasons away from single seaters. The Italian veteran made up positions and beat a few regulars, but he was taken out of the Feature Race before he could complete a lap of his home track, taking away from us and himself the chance to see what he could do.

Ayumu Iwasa *****
Unexpectedly had no pace at all in the Sprint Race, then had similar problems but to a lesser extend in the Feature Race and defended his way to third. Unfortunately, he was disqualified from the latter.

Richard Verschoor *****
It’s not news anymore but Verschoor keeps scoring points, even when running the reverse strategy in a Safety Car-affected race which favoured the prime strategy runners.

Calan Williams *****
With a bit more experience he would have backed out of the overtake attempt at Ascari which put him out of a race where he could have scored points.

Enzo Fittipaldi *****
The Brazilian added his sixth podium of the season in Monza despite qualifying sixteenth. He needs to find some of his usual consistency again.

Tatiana Calderon *****
A retriement due to a collision and a DNS due to a fracture make her string of results since her return worse and worse. Hopefully Abu Dhabi brings her some luck.

David Beckmann *****
Double points at Monza just as he did at Spa, the only VAR driver this year do so. VAR is improving race by race and Beckmann is taking every chance he gets with both hands.

Amaury Cordeel *****
Proving that Zandvoort was no bluff, Cordell scored points in Monza, too. The car and team have definitely improved but this version of the Belgian driver was nowhere to be seen in the first eleven rounds of the season! 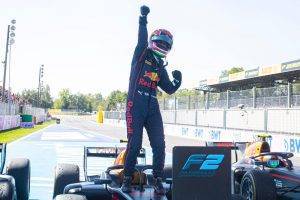