Robert Shwartzman exhibits his extraordinary talent as he wins the second FIA Formula 2 Feature Race of the season!

Yuki Tsunoda, unlucky to have lost radio communications at a critical time of the race, bravely fought back to finish in second place.

Albeit behind two Safety Car starts, the Formula 2 Feature Race eventually got underway at a very wet Red Bull Ring.

With just four laps complete from the initial start Race Control red flagged the session after a weather delay had already hampered the Formula 2, Round 2, Feature Race.

Before a car left the grid, Artem Markelov found his way into the gravel trap – his race over before it started.

Meanwhile at the front Tsunoda tentatively followed the Mercedes SLS, assessing conditions as the Safety Car led the pack around the 4.318km circuit.

Shwartzman, third in last week’s Formula 2 Feature Race explained over his team radio how difficult it was to see the cars ahead as they all got away from the grid with no issue.

Cars could be seen deliberately veering off the racing line so drivers could view the road ahead. Counterproductive when trying to clear the rivers of water. But a necessity when visibility is severely impaired.

Race Control red flagged the session deeming it too wet to continue and requested the cars line up in the pit lane.

Callum Ilott joked he didn’t need a shower later because he was so wet from the first few laps. He went on to say,

Once in the pit lane ART’s Marcus Armstrong could be seen getting out of his car, indicating the session wouldn’t restart for a while.

At 18:26 local time, Race Control confirmed the race would restart behind the Safety Car in a second attempt.

Bernd Maylander has earned his money the last two race weekends, across all formulas, with frequent incidents throughout.

The Austrian circuit has not disappointed. It’s made for an incredible start to the Formula 1 and Formula 2 season.

With red visibility lights incandescently gleaming in the mist, the cars got underway on Lap 5.

Jack Aitken gained one position in the opening few corners leaping up to fourth.

Luca Ghiotto went off the road on Lap 6, Shwartzman took advantage keeping his car on track to pass the Italian.

Christian Lundgaard had plenty of traction to move up the grid. Taking sixth from Ghiotto with a heroic move on the outside, setting Fastest Lap of the race in the process.

Aitken and Ilott found themselves battling for the same position again, a rehash of last weekend where they fought for the final points-paying position.

Lundgaard soon caught them, confident with the wet set-up of his car.

There were problems for Louis Delétraz on his first pit stop with a stall that saw him drop down to the back of the field.

Tsunoda, after securing a comfortable lead, came under pressure on Lap 13, as Zhou gained on him.

Fastest sectors and laps switched between the Formula 2 drivers as the track dried. While tyres heated and cooled at different sections of the track.

Shwartzman was poised to take advantage and Aitken found himself losing two positions in two corners.

Brake discs glowed as temperatures rose from the drying track. With no intermediate tyres, it was a choice of either wet or dry.

Parts of the track were too wet to opt for the latter. The only choice for the Formula 2 drivers was to take their cars off the racing line, using the water as a coolant.

With a comfortable 16 second lead Tsunoda didn’t pit when he got the call. His radio had stopped working.

The Carlin pit wall desperately tried to get his attention with messages on the pit-board – as every lap saw his times come down. A guarantee he would lose precious places.

Tsunoda eventually got the message and pitted. He emerged in fifth – Giving him what seemed like an impossible mountain to climb to retake his well-earned lead.

It lit a fire underneath him and he stormed back through the field, out-braking Zhou to move up to second place.

Shwartzman had taken the lead from Zhou on Lap 27 as he held his nerve against the Chinese UNI-Virtuosi driver. He was already up the road and in the distance.

On the final lap Mick Schumacher battled with Zhou, using every trick in the book. It went down to the line in an exhilarating last lap.

Zhou held on and finished inches ahead of the German to secure third place. Schumacher said,

The race was one lap too short from my point-of-view. Nevertheless, I’m pleased with our race pace. We’ve got a good starting position for tomorrow’s race.

Tsunoda gave it everything he had, closing in on Shwartzman until the chequered flag. But the young Russian drove a heroic race, earning his first win in Formula 2 – The treacherous conditions highlighting the raw talent of the Formula 3 Champion.

Crossing the line Shwartzman celebrated over the team radio with an emotional statement, dedicating his first Feature Race win to his father.

Oh my God! What a race! This one is for my dad.

Shwartzman went on to say in a post-race interview,

I didn’t expect to see myself in P1 today!

In the final laps I just tried to keep the car safe and bring the win home.

Referring to his father who has recently passed away, Shwartzman said,

Hopefully, he is watching up there with a happy smile. 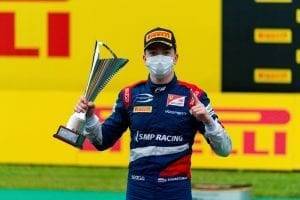