With the second round of the 2022 season behind us, we look at each driver’s performance and give ratings out of 5 stars.

Felipe Drugovich *****
Pole, win and a third place, as we promised, the Drugovich-MP Motorsport pairing was only warming up. Consistency and speed have put the Brazilian on top, and he looks able to stay there a bit longer.

Liam Lawson *****
A race winner now in 2022, he briefly led the championship; a pit crew error forced him out of the Feature Race. He has looked mighty so far, and it will be tough to beat him if he keeps this up.

Jake Hughes *****
Disqualification for a technical infringement felt like an unfair ending for the Briton who had deserved a podium in the Sprint Race. He was equally brilliant in the Feature Race, when he finished fourth.

Dennis Hauger *****
The F3 champ has shown he is already up to speed with the F2 machines, and only lost a maiden win due to confusion between his team and the FIA. He will be a protagonist from now on.

Richard Verschoor *****
Third, in the standings and again on the podium in a Trident, the Dutch driver is really making it happen this season.

Jehan Daruvala *****
Another podium, but again nothing to be too happy for. The title leaders are on a different pace and the experienced Indian needs to up his game to remain in contention.

Jack Doohan *****
More harsh luck for the rookie, as he demonstrated great skills in driving through the field in both races. Unfortunately, he had to start from the back for a technical infringement, otherwise, having qualified third, he could have won a race.

Marino Sato *****
A decent Sprint Race allowed the Japanese driver to score his first point of the season. More of the same in the coming rounds would be a positive result.

Logan Sargeant *****
A harsh fall after the highs of Round 1 for the American rookie, from double points to retirement. He wasn’t wholly at fault for the crash itself, however.

Marcus Armstrong *****
A positive qualifying result could have been better, had red flags not changed the outcome of the session. His race results were identical to those he scored in the first round with a retirement and a fifth place. With more luck on his side, podiums are within reach.

Juri Vips *****
A second consecutive podium keeps Vips near the top of the standings, and the Estonian has a solid base on which to build in the upcoming rounds to try and take his first win of the season.

Frederik Vesti *****
Another weekend below his own capabilities. Out of position in qualifying, he nonetheless made decent progress in the Sprint Race.

Théo Pourchaire *****
More unreliability problems are hampering the Frenchman’s season, but nothing is lost yet.

Clément Novalak *****
Sadly, still no points for the Frenchman on a jubilant weekend for his teammate.

Olli Caldwell *****
Definitely showed signs of improvement compared to last weekend; however, there is still more to do to fulfill his potential.

Ralph Boschung *****
Qualifying high and inevitably losing some ground in the races has become Boschung’s trademark; that was very apparent in Jeddah, when he dropped to fifteenth in both races.

Ayumu Iwasa *****
A very good qualifying performance followed by two races in the points despite all the chaos that Jeddah provided: Iwasa confirmed the positive signs he showed in Sakhir.

Calan Williams *****
Seventh in qualifying, fourth in the Sprint Race: it was a shame that Williams couldn’t repeat himself on Sunday, as his weekend had been great up to that point.

Enzo Fittipaldi *****
Still no points for the Brazilian who has now finished eleventh three times and tenth once, on a day when points were given up to eighth place. His time will come: consistency is definitely not a problem.

Cem Bölükbasi
The rookie was unfortunate to suffer a concussion after a shunt in practice and had to miss both races. No rating can therefore be given to his race weekend.

Amaury Cordeel *****
Qualified at the back, then crashed on Saturday and caused such damage that he had to skip the Feature Race. He will want to leave this weekend behind as soon as possible and look forward to regaining some confidence at an old-school track such as Imola. 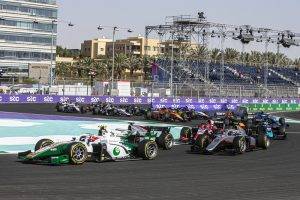