After the first European race of the 2022 season, we look at each driver’s performance and give ratings out of 5 stars.

Dennis Hauger *****
Now steadily amongst the top drivers, Hauger qualified fifth and took his first podium in the Sprint Race. He would have certainly been on course for a similarly positive result had he not been hit by Doohan at the start of the Feature Race.

Jehan Daruvala *****
With second place in the Sprint Race he has become the only driver to stand on the podium in all rounds so far; however, that was partly due to an average qualifying result, which compromised his Feature Race result.

Jack Doohan  *****
Every race weekend seems to bring more despair for Doohan. The rookie certainly has the speed, but too many incidents, some unfortunate, some not, risk spoiling every effort. He started third for the Feature Race but was out in the first metres after contact with Hauger. Unlucky at the moment, let’s see how the next few rounds go for the promising star.

Marino Sato *****
A decent showing this weekend by the Japanese driver, with points that were possible in the Sprint Race but were blocked by a late Safety Car entrance.

Liam Lawson *****
Despite a poor qualifying session he salvaged good points on Saturday, and crashed out on course for more on Sunday. Consistency is now the key to him regaining the lost ground to the championship leaders.

Logan Sargeant *****
One of only four drivers to score points twice this weekend, Sargeant is on the up. He did, however, squander a maiden podium opportunity with a minor error.

Marcus Armstrong *****
The Kiwi took an important victory in the Sprint Race, but that was in part due to a bad qualifying session, where he was ninth and his team mate on pole. Indeed, being at the centre of the pack at the start of the Feature Race, his progress was hampered and he scored no points.

Juri Vips *****
What was looking to be Vips’ best weekend of the season turned out to be his worst. His maiden pole left him vulnerable on Saturday, then he crashed out on his own while contending for the race win on Sunday.

Frederik Vesti *****
Finally points; partially, thanks to the Safety Car, sure, but the Dane was more competitive in Imola than he had been at either of the previous two rounds.

Theo Pourchaire *****
Qualifying wasn’t great and he actually lost ground in the Sprint Race, but he recovered from seventh to first in the Feature Race, choosing the correct startegy and benefitting from others’ mistakes while he made none.

Felipe Drugovich *****
Now the only driver to have scored points in every race, Drugovich’s consistency on a weekend where his pace wasn’t as brilliant as elsewhere has kept him within striking distance of the championship leader. And had the Safety Car not made an appearance in the dying stages of the Feature Race, he would probably still be leading the title race.

Clément Novalak *****
An excellent fourth place to take his first F2 points during the Feature Race. Now he has to prove that it wasn’t a one-off and keep performing at this level.

Olli Caldwell *****
Still no luck fro the Briton, who is the only driver yet to score points among those that have started all six races. He also needs to stay away from further penalties so he can have a clearer mind and concentrate on driving.

Ralph Boschung *****
Another weekend where the F2 veteran was clearly pushing his Campos to the limit, taking a Feature Race podium and retiring not due to driver error, but technical issues.

Roy Nissany *****
A career-best qualifying, a fourth place in the Sprint Race, a brilliant start to the Feature Race and then a rookie mistake (in less than ideal track conditions). So close to making this his best-ever weekend, but still one with more positives than negatives.

Ayumu Iwasa *****
Two top tens, ten points. The Japanese driver quietly gets the job done and still sits in the top ten in the championship.

Richard Verschoor *****
For the first time this year he did not score a podium, but he had clearly accustomed us to more than it was reasonable to expect from Trident on average.

Calan Williams *****
Two races right on his team mate’s tail, with nothing to separate the pair.

Enzo Fittipaldi *****
As we said in the Round 2 ratings, he was already consistent and only needed a bit of luck for a breakthrough result: with a perfect strategy, a good overtake on Boschung and Sargeant making a minor mistake, Fittipaldi scored his first points of the season with a second place!

David Beckmann *****
Back into F2 after half a season and straight into the points: a job well done.

Jake Hughes *****
Although he didn’t reap the rewards this time, Hughes’ driving was as good as ever. Perhaps in qualifying he was slower than usual, and with a penalty only started 20th.

Amaury Cordeel *****
Crashing on the way to the grid was the low point of his weekend, and that was despite finishing over a minute behind the next driver in the Feature Race. He needs to take a calmer approach in Barcelona and get as much mileage as he can to build experience. 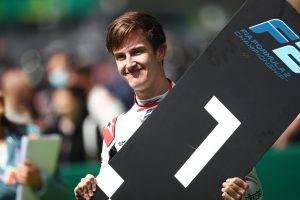