Having raced at the third and final street circuit of the FIA Formula 2 season, we look at each driver’s performance and give ratings out of 5 stars.

Dennis Hauger *****
His Sprint Race was decent up to the point when he got stuck behind Hughes – then he lost momentum and tried too hard to recover the lost positions, crashing into the wall. However, his Sunday was much better, as he took his first Feature Race win after battling with more experienced drivers.

Jehan Daruvala *****
Keeping up his great consistency has moved the Indian up to third in the championship. Very few drivers had two positive races across the weekend, so Daruvala can easily be considered one of the best performers of the Baku round.

Jack Doohan  *****
Qualifying wasn’t great, but neither was it catastrophic. He was, however, completely unable to recover any positions, actually losing two on Sunday, a performance well under his capabilities.

Marino Sato *****
One-upped his team mate by scoring four points in the Feature Race thanks, in part, to others’ errors but also to his own clean driving.

Liam Lawson *****
The Kiwi recovered from ninth to third in the Sprint Race and was in contention for another podium when he picked up a puncture in the Feature Race. While his season seems never to take a turn for the better, his performance this time out was more like what we expect from him.

Logan Sargeant *****
Sargeant was in the mix in both races, actually finishing higher on Sunday despite starting closer to the front on Saturday. The end of the Sprint Race was a bit hectic, and he lost a podium but has moved up to fourth in the championship thanks to his consistency.

Marcus Armstrong *****
Armstrong had the pace this weekend and demonstrated it by finishing fourth in the Sprint Race. He briefly led the Feature Race but squandered it all when he locked up after a Safety Car restart, dropping to twelfth.

Juri Vips *****
Vips could be in contention for the title but, as it stands, hasn’t won a race yet. His second pole of the season turned into a retirement just as it had at Imola. While a mistake can be tolerated around the narrow streets of Baku, the sheer amount of points the Estonian has given up due to his own errors could now well change his future chances in motorsport.

Frederik Vesti *****
What might have realistically been considered a one-off is slowly becoming the ordinary –  Vesti is out-performing Pourchaire. He was faster in qualifying, then victorious in the Sprint Race after dominating the on-track battles with his rivals, and then further points in the Feature Race.

Theo Pourchaire *****
His weekend was unsatisfactory for a driver in contention for the title, especially when his main rival managed to score more points than him.

Felipe Drugovich *****
After three wins in four races, Drugovich appeared less than perfect in Baku but still left Azerbaijan with 17 more points between himself and Pourchaire. While all the other drivers have ups and downs, the Brazilian has maintained an excellent form throughout the season.

Clément Novalak *****
There’s no luck for Novalak, who was forced out of the Feature Race due to a technical problem. He wasn’t exactly setting the track on fire, though.

Olli Caldwell *****
Caldwell was involved in collisions in both races and was the last classified finisher in the Sprint Race. After twelve races, he’s still point-less, and in Baku, he wasn’t any closer to the top ten than in previous races. Leaving street circuits might be something he’s looking forward to.

Ralph Boschung *****
Finally back, after two rounds, Boschung was back to his usual form. He sent Williams into the barriers in his first race but bounced back to score points the day after.

Roy Nissany *****
Again, he was in the top ten but on the day when points don’t go below eighth place. He then caused a collision in the Feature Race.

Ayumu Iwasa *****
Iwasa did well in the Sprint Race but had an accident after a Safety Car restart in the Feature Race, which could have been dangerous for himself and others; luckily, no one was hurt.

Richard Verschoor *****
Trident and Verschoor were back on form in Baku, and the Dutch driver could well have been the driver of the weekend had he not thrown a podium into the bin with a needless crash at the end of the Sprint Race. Fifth in the Feature Race was also an excellent result.

Calan Williams *****
Ultimately, zero points for Williams despite being in contention for some when he was forced into the barriers in the Sprint Race. He then ran into an escape road while leading the Feature Race (but he had not pitted yet).

Enzo Fittipaldi *****
A mistake on his side brought an end to his Sprint Race, but he was again in the points on Sunday.

Cem Bölükbasi *****
Bölükbasi was running close to the top ten when he was a victim of a crash in the Sprint Race and was further behind when, again, he was helpless to avoid a collision.

Jake Hughes *****
While the reverse pole left him out of position and he plummeted down the order, he finished in the top ten in both races, a positive turnaround after some negative weekends.

Amaury Cordeel *****
After just six of this year’s fourteen rounds, he has picked up a race ban. He is just the second F2 driver to do so after Raghunathan (who only took five rounds to reach 12 penalty points), and when he returns, he needs to become less accident-prone. 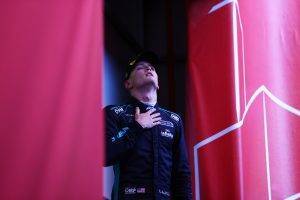