Carlin rookie Logan Sargeant feels he has ‘turned a corner’ after taking pole position at Silverstone, the seventh round of the FIA Formula 2 Championship.

Sargeant became the fourth driver to qualify on pole this season after Jack Doohan, Felipe Drugovich, and Jüri Vips each have on two prior occasions. The Carlin driver’s best lap, a 1:38.432, was nearly two and a half seconds faster than the time he set to top the practice session this morning.

Speaking to InsideF2 in the post-Qualifying press conference, Sargeant felt that he’d made a breakthrough this weekend as he continues getting to grips with the Dallara F2 2018.

“The car has been there all season. I think it’s quite a difficult car to get comfortable with, but I do feel like I’ve turned a corner.

“Obviously, everyone’s been supportive of trying to help me be as quick as I can and as well prepared as I can be.

“As I said, I feel like I’ve turned a corner, and I feel like I’m getting much more comfortable especially coming to tracks that I know better.”

While two rookies – Sargeant and Frederik Vesti – locked out the front row, the best qualifier among the veteran drivers was Drugovich, who took third with a lap time identical to that of ART Grand Prix’s Théo Pourchaire in fourth.

Drugovich and Pourchaire, the top two in the Drivers’ Championship, took the spoils in five of the first eight races, with the other three won by returning drivers Richard Verschoor, Liam Lawson and Marcus Armstrong.

But there’s been a shift in the past two rounds as rookies Vesti and Dennis Hauger have broken through to win three of the last four races.

We asked Drugovich, who holds a 49-point lead at the top of the points standings, whether the progress demonstrated by the rookies on the grid concerned him as F2 heads into the second half of the season. But Drugovich was unfazed, saying he’s opting to focus on himself.

“No. I’m just getting started, mate!” Drugovich said before breaking into a laugh and confessing to a bit of japery.

“For sure, they are going to improve. It’s normal. When you’re a rookie, you just improve throughout the season.

“But you can do that too if you’re in the third season like me. I’m doing it every weekend. I feel like I’m a better driver each round.

“That’s what I’m trying to do; I just focus on myself and get better each time I get to the track.” 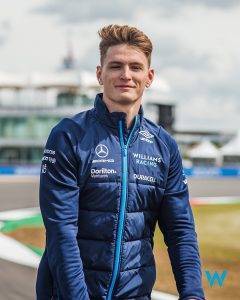