Sargeant Needed to be More Aggressive in Barcelona

Sargeant Needed to be More Aggressive in Barcelona

FIA Formula 2 driver, Logan Sargeant, had a golden opportunity to turn his third place into a P2, in today’s Barcelona Sprint Race, had he been a little more aggressive.

The American, sat on the reverse grid in sixth, but rapidly made his way to P3, as those around him experienced bad starts.

“I was working on the procedure that we have and just dialling that in. I think I was able to do that today.

“It feels good to finally get a good start.”

By Lap 4 his Carlin machine was working well for him, and he stated over the team radio that he was much quicker than, Ayumu Iwasa and Felipe Drugovich, in front.

A lap later Sargeant made his move, punching in the fastest lap as he did so. He sent one up the inside of the Japanese driver, but couldn’t make it stick.

“At the start I was really quick. I felt quicker than the two in front and I was eager to get into P2.”

Tyre management was key today, in the soaring temperatures at the Circuit de Barcelona-Catalunya:

“There’s a fine line between hurting your tyres too much and what’s realistic. I think being so close to the car in front started to eat through the tyres in the later stages.”

Despite the missed opportunity this is a good result for Sargeant, and the Carlin team:

“I think our pace was really good throughout, as good as anyone. It’s really positive.”

On reflection, Sargeant may approach his overtaking manoeuvres differently in tomorrow’s Feature Race:

“The one chance I really had to overtake, I wish I would have been more aggressive, for sure. It just sort of popped me out, because he moved a bit late, and it made me a bit more cautious than I would have been. But looking back, I definitely would have sent it a bit harder.” 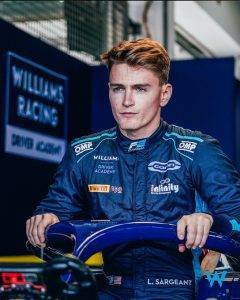