Sargeant optimistic to take the win from third

Sargeant optimistic to take the win from third

Carlin’s Logan Sargeant reflected on his Qualifying session around the physically demanding Zandvoort circuit, as he settled nicely into the third position after setting an impressive purple sector.

The long summer break gave Sargeant room to show improvements in placing his Carlin inside the top three for the second time this season, as the restarts from the session helped Sargeant to improve his lap time with a 0.528 gap to the MP Motorsport driver. However, He believes that he hasn’t extracted the whole potential.

“It was definitely a pretty eventful one. The team gave me a great car today.” Stated Sargeant,

“I think from my side, probably could have put together a bit of a better lap, but I had too much to get to today.

“Obviously, I’d put together a decent enough banker on the first lap, and the tires were going away, so it was a bit of an all-or-nothing lap. Nothing too eventful. It didn’t really impact my end result.”

The American hasn’t been the luckiest driver on the grid in the last three rounds of the season, with three DNFs that cost him points, as he looks forward to retaining his position in third in the championship standings.

Moreover, he is one of the five Formula 3 graduates from the grid who claimed silverware in Zandvoort last year with a second-place finish.

With his knowledge and experiences around the Dutch track, Sargeant is optimistic about taking the win from third. He said, “The first step is to sort my starts out, which I feel like we’ve done. I had a good, good practice start this morning, and from there, I think we should be in a good position.

“There won’t be too much overtaking here, but we’re at the sharp end, so we’ll try and stay there.” 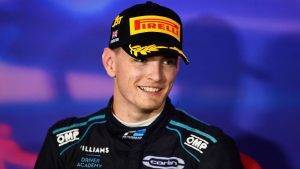