Carlin’s Logan Sargeant admitted that anger fuelled him as he climbed through the field to win a wet-dry Feature Race at the Red Bull Ring, which hosted Round 8 of the FIA Formula 2 Championship this season.

Starting third on a damp track, Sargeant elected to begin the race on wet tyres, as did everyone else in the top seven. Richard Verschoor, who crossed the line first before being disqualified because of an insufficient fuel sample, was the first of those who started on dry tyres, along with many of those in the bottom half of the field.

Sargeant got a lacklustre getaway and fell to fifth before swooping around the outside of Doohan for fourth into Turn 9 at the end of the lap.

“From my side, being on the wets [was] obviously the wrong tyre. I was on the wet side of the grid, which didn’t go over too well for me. So I’d say the first couple corners didn’t go great, but then I settled in,” Sargeant told InsideF2 in the post-race press conference.

A safety car came out on Lap 2, and when the race restarted three laps and five minutes later, the circuit had dried significantly, causing the wet runners to fall back. Stuck on the outside line of the circuit, Sargeant dropped from fourth to 15th in just over half a lap.

At the end of Lap 7, Sargeant came into the pits to change from wet to dry tyres, preparing to face a long recovery drive. But his pace on a fresh set of the hard compound was the best in the field, and he overtook Ayumu Iwasa on Lap 9 and pole-sitter Frederik Vesti on Lap 12 to become the leading driver of those who started on wet tyres.

As Sargeant passed Vesti, those who started on the soft tyres began to come in for hards, equalising the order. With warmer tyres, Sargeant carved through the pack to move to fifth by the end of Lap 16, capped off by an overtake around the outside of former FIA Formula 3 team mate Enzo Fittipaldi at Turn 6 that later turned out to be the winning move.

The next lap, Sargeant dived down the inside of Carlin team mate Liam Lawson at Turn 3, but the pair touched wheels as Sargeant forced himself through.

They complained over the radio and blamed each other for the contact, and Sargeant explained that the anger he felt during the race, particularly over the decision to start on wet tyres, motivated him in his recovery to the podium.

“Honestly, I had no idea where I was, where I was going to come out, where I could maybe get to. I was angry, I stayed angry, and honestly, I think that’s what helped me get back up the field.

“I was aggressive. Sometimes, angry can be good.”

Sargeant ended the race fourth on the road, but a five-second penalty for Campos returnee Roberto Merhi for exceeding track limits, the disqualification of Verschoor, and a 20-second post-race penalty for Daruvala for a grid box infringement promoted the American to victory.

With the win, Sargeant has jumped Théo Pourchaire to take second place in the standings on 115 points. Crucially, championship leader Felipe Drugovich did not score points in the Feature Race, meaning Sargeant is now just 39 points off the lead. 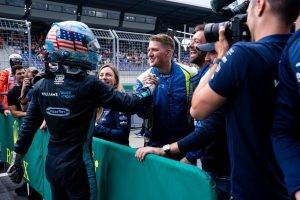