American driver Logan Sargeant took a last-gasp pole position for Round 9 of the 2022 FIA Formula 2 Championship in France, beating DAMS’ Ayumu Iwasa by just six-thousandths of a second.

The Williams Academy driver produced a 1:43.871 to snatch his second Formula 2 pole position and will now aim to take a third consecutive Feature  Race victory – an unprecedented feat in 2022.

In an exciting session that included a delay for a red flag, the top spot changed hands multiple times, leaving no one sure who would grab pole position and the two bonus points that come with it.

First, Jack Doohan, Logan Sargeant, and then Frederick Vesti sat atop of the times before Iwasa produced a superb lap to look set for pole.

However, the Japanese driver failed to cross the start line to begin a final lap, which allowed Sargeant to pip the Red Bull Junior Team driver to the pole.

Iwasa’s time held firm for second fastest, ahead of ART’s Frederick Vesti, who had threatened to make it back-to-back poles.

The Sprint Race on Saturday starts at 18:00 CEST, with lights out for the Feature Race at 09:35 CEST on Sunday.

The track temperature, which had nudged 50°C in practice, had dropped to 48°C by the time the green light in the pit lane allowed cars onto the circuit.

On the hard compound Pirelli tyre, the drivers struggled to control temperatures. But with the soft compound, would the tyres even last a whole flying lap?

MP Motorsport’s Drugovich was the first main contender to set a lap time, but Pourchaire, Armstrong, Vips, Sargeant and Doohan all went faster immediately after.

Virtuosi’s Australian driver Doohan, who had been wrestling his car for much of practice, was just seven-thousandths of a second faster than Estonian Vips.

The tyres were able to bring performance for a second lap, after a cooling lap, as Sargeant jumped to the first position, beating Doohan, who did improve his time, but a slow final sector cost him.

DAMS’ Ayumu Iwasa then found himself a space between Sargeant and Doohan, a tenth off the American.

During the usual lull in proceedings, Carlin told Sargeant that they would need the “two tenths in the bag in sector 1”, to which the American replied on the radio, “I got ya.”

As the field returned to the track, they did so without Fittipaldi, the Charouz driver climbing out of his car with an apparent issue, leaving his seventh position incredibly vulnerable.

Disaster struck for Dennis Hauger as his PREMA slowed and stopped by the side of the circuit, meaning a red flag was required to halt the session with seven minutes and sixteen seconds remaining.

After a brief delay, 20 cars ventured out with one goal: to deliver the fastest lap of the weekend and take pole position.

Drugovich momentarily went fastest, but both ARTs were quicker, Frederick Vesti heading his team mate, but Ayumu Iwasa beat them all with a 1:43.877, one-tenth ahead of Vesti, Doohan, Sargeant, Pourchaire and Drugovich.

In the final laps, Drugovich was the first to start his final effort, but Iwasa would not get a final attempt as he failed to start another lap before the chequered flag fell.

Drugovich, Vesti and Pourchaire could not beat the Japanese driver’s time, but Logan Sargeant could and snatched the pole by just sixth-thousandths of a second.

The American was delighted with his effort, meaning he starts Sunday’s Feature Race from the front of the grid. 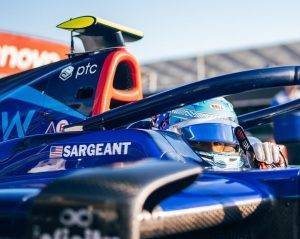