Logan Sargeant took his maiden win in the FIA Formula 2 Championship in front of a “spectacular” crowd at Silverstone. After a strong weekend, the American driver celebrated success at one of his favourite tracks.

The Williams Academy driver took his first pole position in F2 in Qualifying, and followed it up with a lights-to-flag win, which sees him move up to third place in the Championship standings.

Speaking during the post-Feature Race press conference, the rookie shared what made his weekend particularly special:

“My family was here for the first time since 2019; it was awesome to do it in front of them. The energy from the crowd was pretty spectacular. I’d say they have some of the best fans in the world.”

Sargeant tasted success in Silverstone for the second time in his career, after winning there in 2020 while racing in FIA Formula 3, and had plenty of kind words for the circuit after the race:

“I love this place, I’ve done a lot of laps here, the energy… it just suits me, I love it. I’d race here every weekend if I could!”

After a strong launch off the grid, the Carlin driver held first place while Frederik Vesti lit up the rears and dropped back from P2. Sargeant then built a two-second lead, and looked in control throughout, despite the efforts of a charging Théo Pourchaire in the closing laps:

“It was a long, hard-fought weekend. Théo kept me under immense pressure in the race, but I got it done… I knew he would get into my dirty air and it would be quite difficult for him. I really tried to nail my laps and keep it clean.”

Sargeant is the highest-placed rookie this season and has been consistent all year, only finishing outside of the top 10 on one occasion.

He has started to turn those points finishes into podiums, and after standing on the second step of the podium in Baku, went one better in Silverstone, as he builds momentum:

“The issues at the start of the year came down to procedures and the right way to do things with this car. I feel like I was able to iron [those issues] out pretty quickly, I’m quite comfortable with everything now, and it’s coming together: the more you drive the car the easier it gets.”

At the halfway point in the season, Sargeant is very much still a factor in the title fight and will hope that his upward trajectory can continue when the Formula 2 action continues next weekend in Austria. 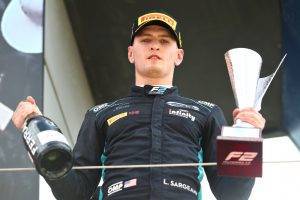