Sargeant’s Formula One Goal to Finish Third in F2 Championship

Sargeant’s Formula One Goal to Finish Third in F2 Championship

Logan Sargeant will recompose himself for Sunday’s Feature Race, and refocus on his goal: to graduate into Formula One next season, by finishing a strong third in the FIA Formula 2 Drivers’ Championship.

“There were positives and negatives to the race. The positives, we had a really good start off the line, the negative was, I didn’t have a very good first lap. So that’s gonna be something I need to look at and improve on for tomorrow.

“I think Liam [Lawson] showed he had really good pace in clean air, I struggled a little bit in the dirty air, but luckily I have him to compare to, see what I can do different.

“I think we need to find a little bit of pace but relatively it’s ok, so I’m looking forward to tomorrow. I’d love to close the season strong with a podium.”

Having had on track battle with Alpine Academy driver, Jack Doohan, on previous occasions, breaths were being held as they had a close fight throughout the Sprint Race. Doohan has his own reasons to bring his Virtuosi car home, and Sargeant needs to gain vital super licence points this weekend, in his bid to become a Williams Formula One driver next season.

“I feel like me and Jack are friends. We have respect for each other. I feel like all the drivers in the paddock respect each other. We all know what’s at stake, and at the end of the day we’re all trying to do the best that we can for our teams.”

There are times when Doohan would have been a little less conservative on track. Whether the Australian had his own and/or Sergeants immediate future in mind, is something we may never know, but Sargeant voiced all of our opinions:

“If he was being considerate I appreciate it.”

The Feature Race result is still to be decided, as is Sargeant’s fate…

“Tomorrow, it’s all in at this point. We’re in a great place – as I said, we need to pick up on a little bit of pace but I’m not too worried about it. It’s going to need to be more attacking on the first lap, put myself in a good position and at least hold put.

“The goal will be to finish third in the Championship. I feel like that’s very doable, and that’s what we’re going to go and do.

“We’re all out there racing for ourselves, we’re all racing for our own careers here and I think from a team perspective we need to finish as high as we can because we’re getting quite close in the Teams’ [Championship], you know we have a real chance tomorrow, for Liam, myself, and the team.”

All of us here at insideF2 wish Logan the very best of luck in his quest to become the first American Formula One driver, in over 15 years. 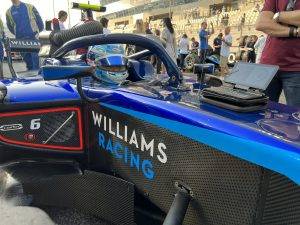