Sato looking to exploit his previous experience in Hungary

Sato looking to exploit his previous experience in Hungary

Virtuosi Racing’s Marino Sato is one of the most experienced drivers on the Formula 2 grid. And given the technical nature of the Hungaroring, it seems like knowledge could come in handy for the Japanese driver.

Speaking to from the paddock, Sato revealed how he has been able to make the step-up in qualifying, his bad luck in 2022, the race pace, and the difference between Formula 2 and Formula 3.

Asked about his improvement of pace during qualifying in France, the Virtuosi driver replied, “I would say like we have all the pieces, every bit is getting right and not far from the good data. But so far didn’t really manage to put them all together.

Sato’s 2022 Formula 2 season hasn’t exactly lived up to his high standards. While he has managed to score points but retirement from races has hurt his campaign. In France, he scored points in the Sprint Race but an incident during the Feature Race forced him to retire for the third time this season.

Marino was quite frank about this and said, “I think it’s not only this year but it has few years in F2 haven’t been luckiest I would say. We have also had a lot of issues this year; I think we are a bit behind on running time due to that.”

“Luckily we did not have so many DNF in the races but obviously a lot of things is done before the race; so we are always a bit behind.”

With a lack of running time, the simulator does play a crucial in helping drivers not just understand but also get used to a new track. When asked if he was using the simulator to make up for lost time, he explained that they also depend on the teammate.

The Japanese driver added that when even the team isn’t able to get in a run, the second running car helps Virtuosi get a reference.  Praising teammate Jack Doohan, Sato said, “Well we can really see by our teammate. I think Jack has been doing a really good job this year.”

The uniqueness of Virtuosi Racing is that they don’t have an F3 team and that could act as a disadvantage for the team. However, Marino sought to disagree. He reasoned, “I think it’s not really making a difference. The team is focussing on Formula 2.”

As for his thoughts about his weekend in Budapest, could Marino Sato’s experience come into play around this circuit? He noted, “I think the track is quite technical. Lots of corners and it’s quite busy, so no really rest.”

“But I think coming from Free Practice, I think we have a good base. So yeah, need to see and last few times in Formula 2, qualifying here has been wet; so it looks like we’re gonna have a dry qualifying.”

Concluding that Virtuosi’s pace has been strong in the wet; how many positions can Marino Sato for Saturday’s Sprint Race from P15 on the grid? 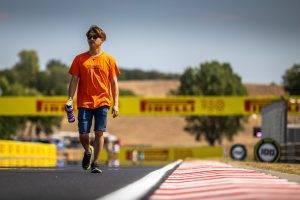