Frenchman Pourchaire, arrived in Formula 2 as the youngest driver on the grid at just 17 years of age. And with two race weekends under his belt with HWA-Racelab in the 2020 F2 season, he started the 2021 campaign well in Bahrain with a sixth in Sprint Race two, and eighth in the Feature Race.

However, at Monaco, Pourchaire shone with a storming lap to take pole position in the Feature Race by just under half a second from PREMA’s Robert Shwartzman.

After picking up a seventh and a fourth-place finish in both Sprint Races, Pourchaire dominated the Feature Race to take his maiden Formula 2 victory. He is the first French Formula 2 race winner since the late Anthoine Hubert in 2019.

“I won the Monaco Feature Race and I feel so happy. The team did an incredible job, and the car was amazing. I was under pressure for around 20 laps, but then I was just really, really fast. We did a really good strategy, and yeah, we won at Monaco. I cannot believe it, I am so happy.”

At the next round in Baku, Pourchaire qualified fourth for the Feature Race, which he then followed up with fifth in the first Sprint Race.

Pourchaire’s weekend began to unravel in the second Sprint Race as he could only finish ninth, before his Feature Race was ended on Lap 1 after being sandwiched by Marcus Armstrong and Dan Ticktum.

To make matters worse, Pourchaire fractured his wrist in the accident and was treated in hospital, before flying home to France to finish his school career.

It is still questionable whether Pourchaire will race at Silverstone due to the injury. He remains sixth in the Drivers’ Championship.

After over a year off as he recovered from his injuries, Correa came into the Formula 3 season as determined as ever to get back on the road to Formula 1.

Correa’s hard work over the winter paid off as he returned to the Formula 1 support bill with ART Grand Prix in Formula 3, duly picking up an emotional 10th place in Race 2 in Barcelona.

More points followed at the next round at Paul Ricard, with Correa qualifying an excellent ninth before finishing sixth in Race 1 and ninth in Race 3.

Correa then added to his points tally with 10th in Austria after multiple drivers received post-race penalties. However, the American failed to score in the next two races ending the first three race weekends 18th in the championship.

Sauber Academy’s newest driver addition is Emerson Fittipaldi Jr, son of two-time World Champion, Emerson Fittipaldi. The young Brazilian will combine his commitments in the Danish Formula 4 championship with a season in Karting.

Fittipaldi started the season well with a podium and fourth-place finish in the opening round of the Danish Formula 4 Championship held at Padborg Park.

After the second round at Sturup Raceway was cancelled, the series returned to Padborg Park, with Fittipaldi qualifying on pole position. However, his maiden victory was snatched away after Juju Noda took a desperate lunge on the final lap, ending the Brazilian’s race. Leaving Fittipaldi senior visibly outraged.

Fittipaldi Jr fought back to finish fifth in Race 2 before finishing the weekend in style with a podium third place in the final race. 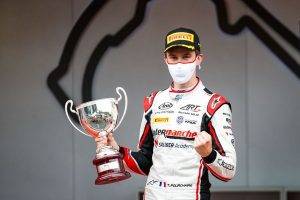