Mick Schumacher has credited PREMA for his Formula 2 championship success after taking home the title at the final race in Sakhir.

Schumacher has been with the Italian team since his ADAC and Italian Formula 4 campaigns in 2016 and won the European Formula 3 title with them in 2018.

This year has seen PREMA dominate the junior formulas, winning the drivers’ and teams’ titles in Formulas 2, 3, Regional European and Italian F4.

Speaking after the race he said: “To be honest, I’m a bit overwhelmed. I don’t really understand or feel as a champion yet, I guess it’s going to take a few days maybe.

“As I said I’m so happy and so grateful to have been working with those people and I’ve got to learn them, you know, personally and so well.

“I really can say that they’re you know, all friends of mine and basically I just want to say I love you to those guys really, they are the best.”

The Ferrari Academy driver’s title was momentarily in doubt as he had to put for new tyres after an opening lap lock-up.

He ended up finishing the race in 18th, after starting third on the grid. However, as Callum Ilott failed to finish in the top two, Schumacher took home the 2020 Formula 2 title.

Describing the incident, he said: “To be honest, I don’t really know what happened. I knew the wind conditions were going to be tricky, it was very gusty.

“We had a lot of tailwind going into Turn 4. I braked too late I mean, that’s the brutal truth. I was too late on the brakes which kind of compromised the whole race.”

This season has seen one of the closest title fights in F2, with five drivers still in title contention heading into the final round in Sakhir. However, the German driver managed to finish 14 points ahead of Ilott in second.

Schumacher said: “The guys who are driving this year were absolutely, you know, amazing. They were all on a high level of competition driving and they’ve all been really respectful, they’ve been great.

“You know also to Callum, like, I mean he gave me a run for the money and it’s been really tough but so enjoyable at the same time.

“Also, a really big thank you to him and a big thank you to Robert. he’s kept on pushing me this year, kept on making me you know, want to work harder, work on myself, trying to put those extra hours in with the team.”

After Schumacher was announced for Haas in 2021, we look forward to seeing if the latest Formula 2 champion can show the same impressive talent that took him all the way to the title. 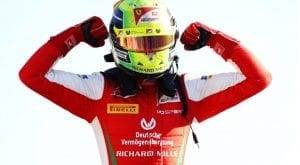