PREMA claimed another podium in Sochi with Mick Schumacher after the Sprint Race was red-flagged due to a crash.

Fortunately, both drivers involved in the collision escaped uninjured, the race was stopped for good and half points awarded. But the collision caused damage to the side barriers which had to be repaired before any racing could occur.

Schumacher was able to secure another podium finish after moving from eighth to fourth in the first lap. He even had time to gain one more spot to take another podium.

Schumacher said: “It was a heavy crash, so I’m glad that Luca and Jack are fine.

“By the time the red flag came out, I was comfortably in third position after having had a great first lap and gaining four positions at the start.

“Nevertheless, I would have hoped for a regular race; however, we still can be very happy with the weekend.

“Unfortunately, we are now facing a nine-week break, but I’m already looking forward to Bahrain and the final showdown in the title fight.”

Robert Shwartzman also had a good first part of the race. Starting from 11th, the Russian moved up one place but couldn’t get any further due to the red flag.

Shwartzman said: “It was a weekend to forget, the third one in a row and being in front of my home crowd, I’m quite disappointed.

“The start itself was not bad even if I had a bit of wheelspin. Then, in turn, 2, I found myself in the wrong place again and lost a bit of ground there.

“After that, we had just a few laps without many opportunities to get past because we were all in a train.

“I tried to push harder, but there wasn’t just the right moment to overtake.

“Then there was the crash, and I’m happy that everyone involved is okay because it was very big, and the race got suspended.

“I think I need to work a lot; we are struggling in terms of pace and general preparation.

“For Bahrain, I want to be prepared, do the work that I need to do and put everything together to hopefully be back to the results we had at the beginning of the season.”

PREMA now head to the season-closing doubleheader in Bahrain with the lead in both the constructors’ and drivers’ championships. 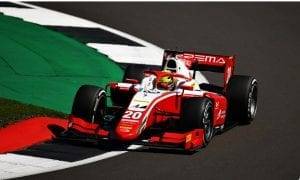