Mick Schumacher placed himself in the championship fight with successive podiums in Spa-Francorchamps this weekend.

After achieving third place in the Feature Race yesterday, Schumacher continued his run of form to take his third podium on the bounce.

Speaking about his pace during the race, Schumacher said: “I think the team managed to give me a car which was consistent on every part of the track, and allowed me to follow quite closely behind people while fighting.”

Initially, Mick Schumacher battled with the UNI-Virtuosi of Guanyu Zhou for the final podium place.

Nevertheless, he along with many of the drivers on the grid had to be conscious of their tyre management, with Schumacher saying: “it wasn’t easy to try and fight hard and get the positions, then try and get the clean air. […] my rear tyres were quite on the limited, so I had to pace myself.”

However, as Dan Ticktum struggled with damage from his earlier collision with Roy Nissany, the German driver was able to put his overtaking skills to the test and pass him on the Kemmel Straight.

When speaking about his battle with the DAMS driver, he said he “knew he had a problem with the front wing” and “just had to line him up properly” to ensure he could make the overtake stick.

Six podiums so far this season for Mick Schumacher has seen him rise to fourth in the drivers’ championship and close the gap to the leading pair of teammate Robert Shwartzman and Callum Ilott. Despite this success, Schumacher still continues to look for improvements in order to take his first victory this season:

He said: “Looking at the pace, there was more possible. I think with a better start it would have been easier to fight with the top guys, but nevertheless P2 is really good. A good amount of points, in both races, and very good consistency… I can just carry this through to the next weekend.

“In my mind we’ve already had a few races where the win was possible, and it was in my hands, but obviously circumstances did take action.

“I’m very focused on my points scoring, which is the main thing, and being consistent, as I said, from race weekend to race weekend. If I do that consistently the race win will eventually come to me.”

A continuation of this form could see him gain traction on his championship rivals and with rumours of a possible Alfa Romeo seat for 2021 abounding, the Ferrari Academy driver will be hoping that his consistency pays off heading into the Italian double-header at Monza and Mugello. 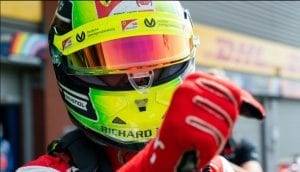