Despite failing to score, Mick Schumacher became the 2020 Formula 2 champion as Jehan Daruvala took his first win in Formula 2 in the Sakhir Grand Prix Sprint Race.

Schumacher locked up early on and had to pit for new tyres midway through the race, but Callum Ilott was unable to score enough points to take the title, eventually finishing outside the top 8.

Daruvala and pole sitter Dan Ticktum battled throughout the race, with the Indian finally making the move for the win. Yuki Tsunoda made it a Carlin 1-2 by passing Ticktum at the final corner as he hopes to move up to Formula 1 in 2021.

It looked at one point like Ilott had a chance of title glory, but his tyres faded and he lost ground on the front two and lost positions in the latter stages.

From reverse grid pole Ticktum got away well and defended from the fast starting Schumacher. The German looked for the move into Turn 4 but locked up massively, almost colliding with Ticktum and losing out to Daruvala.

Ilott looked to benefit from Schumacher’s compromised line, but Schumacher defended strongly to hold on to third.

While the Brit wanted to look forwards to Schumacher, he had to deal with the other PREMA as Robert Shwartzman attacked, but the Russian driver couldn’t make a move stick.

The flat spot wasn’t bothering Schumacher though, as he pulled off an incredible move on Daruvala around the outside of Turn 6 to take second place.

Schumacher’s joy only lasted a few laps however, as Daruvala came back at him, making a great move to retake the position as Ilott closed in.

Ilott was pressuring Schumacher for third place and nearly made a move on Lap 17 as the PREMA driver locked up once again, but Schumacher managed to hold on.

This battle invited Shwartzman to get involved in the battle, passing Ilott before the Brit came back to crucially take the position.

It seemed to be just a matter of time before Ilott got through and on Lap 19 he dived to the inside at Turn 4 to take the position.

Schumacher lost so much momentum after Ilott’s move, losing out to Shwartzman and Guanyu Zhou. The vibration from the tyres was becoming too much and at the end of the lap Schumacher pitted for new tyres.

Ilott had a four second gap to Ticktum and Daruvala ahead, but Shwartzman was keeping him occupied from behind.

But Ilott got a break as his teammate Zhou came through to take fourth and while the pair were battling, Tsunoda also passed Shwartzman, allowing Ilott to move clear of the pack.

After several laps of battling, Daruvala finally passed Ticktum with ten laps to go for the lead and almost simultaneously, Tsunoda worked his way ahead of Ilott, ruining his unlikely title charge.

Tsunoda chased Ticktum and passed the DAMS star at the final corner on the final lap to complete a very impressive final weekend of the season.

While chasing Schumacher, Ilott damaged his tyres too much and he paid for it late on in the race, losing out to several drivers to eventually come home in P11.

All the attention will be on Schumacher, who won the title despite finishing down in P18, but it was a brilliant drive from Daruvala to take his maiden F2 win ahead of Tsunoda and Ticktum.

Zhou took fourth in a strong weekend for him, ahead of Shwartzman and Giuliano Alesi. Hitech pair Luca Ghiotto and Nikita Mazepin also passed Ilott to take seventh and eighth as the Brit finished down in P11. 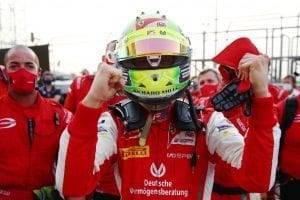