Schumacher thanks his team after Monza victory

Schumacher thanks his team after Monza victory

Schumacher Storms To Victory at Monza

Mick Schumacher took a surprise victory at the Autodromo Nazionale Monza to become Formula 2’s tenth different winner this season and put himself in title contention.

After an incident in qualifying that saw the driver end up in the barriers at Ascari, the Ferrari Academy driver knew that he had a lot to prove going into the Feature Race.

Speaking about the incident, he said: “I think that the team did a mega job to get the car out again after yesterday’s incident in qualifying. When you are pushing, you are obviously trying to improve yourself and I went a bit over the limit and therefore ended up in the wall.”

The German driver caught many of his fellow drivers unaware at lights out, with his superb start storming him up the grid from seventh to second by Turn 1. He then went side-by-side with pole-sitter Callum Ilott into the first corner. However, the British driver managed to hold on to the lead and Schumacher was advised to preserve his tyres to extend his stint on them.

Schumacher spent the early laps of the race trying to keep up with Ilott, who pulled a 2 second lead and looked to be on for another victory. However, an unlucky pit stop saw the Brit stall in his pit box and drop to the back of the pack.

As a result, Schumacher inherited the lead before pitting one lap later. Following the drivers on the alternative strategy pitting around Lap 19, Schumacher resumed the lead of the race and focused on building a gap to the second-place ART of Christian Lundgaard.

Battles behind helped Schumacher extend his gap to second-place to 3 seconds at the chequered flag, with the Italian driver Luca Ghiotto dispatching Lundgaard in the closing laps of the race.

Schumacher credited his win to work from his team at PREMA. He said: “It was a long night for the boys, so I really wanted to get good points for them. I didn’t think that I was going to win, but I wanted good points and a good race for the guys.

“They stayed up until 2am yesterday and worked on the car to get it ready. They did that and they did it in style, so I am very, very proud of them. This race is for them. We as a team really deserve this one.”

His seventh podium so far this year has seen him close the gap to team mate and championship leader Robert Shwartzman to three points. The Russian driver jumped up the field to finish ninth after a difficult qualifying saw him start 16th.

Fellow Ferrari junior Callum Ilott, tied with Shwartzman on 134 points, had a mountain to climb after his pit stop. However, the Brit undertook a remarkable recovery drive to finish in sixth place.

PREMA have extended their lead in the teams’ championship to nearly 30 points, with 265 and their nearest rivals UNI-Virtuosi on 236 points.

The drivers’ attention will now turn to the Sprint Race tomorrow morning. Schumacher will be hoping to continue his momentum at Monza and recreate his successful 2018 European Formula 3 campaign, which saw him dominate the second-half of the season to take the title.

With three points between first and third in the drivers’ standings; it looks like the race for the Formula 2 Championship has been blown wide open. 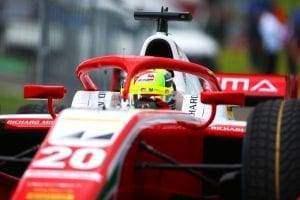