The German had a flying start cruising to P2 from fifth on the grid.

Callum Ilott was first into Turn 1, holding onto his lead. Behind him, Schumacher out-braked the cars ahead to quickly stake his claim on the race.

Schumacher challenged Ilott for the lead on Lap 4, using the slipstream from Ilott’s car that was punching a hole in the air for the rest of the field. However, he settled for second place as the pass didn’t stick .

Yuki Tsunoda was buried by the pack finding himself in fifth place by the end of Lap 1.

After a poor getaway for Ghiotto he kept in touch with the top five to stay in contention at his home race.

The soft tyre choice enabled the leading pack to create a distance between the medium tyre drivers.

Guanyu Zhou left the track in a tussle with Marcus Armstrong – the New Zealander was rewarded with a time penalty by the race stewards for the move.

Ghiotto attempted a three-way pass on Tsunoda and Lundgaard but went straight on at the chicane and dropped a couple of places.

Shwartzman pitted on Lap 8 emerging in 21st place. The Russian’s weekend going backwards rather than forwards.

Dan Ticktum battled his way up the order. After starting in 10th place he found himself in P5 by Lap 10 – gaining five places.

While Schumacher pitted, the DAMS driver stayed out attempting to create a gap between himself and the German. There appeared to be a podium place strategy for the team that didn’t quite play out.

Ilott pitted on Lap 12, stalling his Uni-Virtuosi car in the box. This plunged him down the order.

Tsunoda pitted on the same lap, overtaking the British driver for track position.

Ilott emerged in 21st on the track with a mountain to climb; to gain as many points from the Formula 2 Feature Race as he could. Claiming fastest lap after fastest lap, Ilott’s charge was nothing short of heroic.

Mazepin and Nissany battled. It saw the Hitech driver lose multiple places as he left the track and took a diversion through the gravel trap.

Ghiotto jumped Tsunoda on his pit stop but couldn’t quite beat Schumacher out.

Mazepin saw his car lose power on Lap 17 and dropped to P17 before his Hitech car came back to life.

New boy Jüri Vips found himself leading the race on Lap 19 before he pitted on Lap 20. An experience he’ll relish until a full-time drive comes his way.

Ilott, on a charge, had Armstrong questioning the Uni-Virtuosi’s pace. Seemingly both cars have a turbo-boost button as both drivers noticeably picked up the pace.

The PREMA team radioed the Russian to say “Stay with him.” It was futile as the Brit was on a charge after his pit stop mishap.

Drugovich and Matsushita almost came together on Lap 24. A moment that probably saw the MP team hold their breath. Both emerged unscathed though a little too far down the finishing order than the team would like.

Ghiotto battled his way into second place, taking the position from Lundgaard in the final laps of the Formula 2 Feature Race.

On the final lap Ticktum stole P8 from Shwartzman who ended his race in P9, and in quick succession, took P7 from Louis Déletraz to start on the front row of the grid in tomorrow’s Sprint Race.

Still in with a Championship chance, Ticktum has had an impressively solid season. When given the tools, he’s delivered. A sure reflection of his abilities.

Daruluva ended his race in 10th.

Vips came a respectable 11th after an impressive Monza weekend.

Pedro Piquet and Jack Aitken crossed the line in 12th and 13th, having a seemingly quiet race between them.

Armstrong finished the race in 11th place but classified in 14th, as he was penalised for the earlier incident with Zhou.

MP’s Matsushita and Drugovich ended their Formula 2 Feature Race in 15th and 16th.

P17 and P18 saw the BWTs of Artem Markelov and Giuliano Alesi end their race together.

Also holding hands across the finish line were the Trident’s of Roy Nissany and Marino Sato, in 19th/20th.

Guilherme Samaia was the final classified driver finishing in 21st.

The only retirement of the Formula 2 Feature Race from Monza belonged to Nikita Mazepin, in the first race of the season that didn’t see an outing by the Safety Car.

There were jubilant celebrations and singing on the team radio for Schumacher and the PREMA team in an incredibly well driven and well strategised race.

Schumacher: “My guys did everything right to put the car back into shape after yesterday’s Quali. And I’m really happy to be here now.”

A picture is forming of the top four Championship contenders. There have been ten different winners to date.

With four weekends, and eight races left, this season looks like it will go down to the wire.

Who’s your money on? Shwartzman? Ilott? Tsunoda? Schumacher? Or are your hopes on another driver? 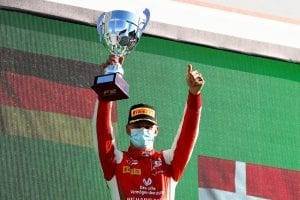