Mick Schumacher took a crucial victory in the race for the championship after a superb drive to win the Feature Race in Russia.

At the start, pole sitter Yuki Tsunoda got away well from the line with championship leader Schumacher passing Tsunoda’s Carlin teammate, Jehan Daruvala, for second place into Turn 1.

Further back in the field Jüri Vips tangled with both Charouz cars of Pedro Piquet and Louis Delétraz into Turn 2 with the incident in the process eliminating Christian Lundgaard and Vips whilst the Safety Car was brought out to clean the debris.

Roy Nissany and Felipe Drugovich joined the list of retirements in the pit lane after damage caused by the Turn 1 incident.

The Safety Car pulled in on Lap 3 and almost immediately Schumacher was on Tsunoda’s tail with the Honda junior desperately trying to pull away and build a gap before the mandatory pit stops.

Nikita Mazepin made his way through the field with the Russian passing Guanyu Zhou for seventh place.

Daruvala was the first to pit for fresh tyres with the Indian dropping down to 16th place after his pit stop ahead of the two Charouz drivers.

Luca Ghiotto finally caught Jack Aitken. The Brit-Korean driver lost fourth place into Turn 1 as the Italian went straight past with the help of DRS.

Tsunoda, Schumacher, and Ilott all came into the pits on Lap 9. The order remained unchanged at the culmination of pit stops with Aitken now the race leader on track.

Mazepin challenged Aitken for the race lead into Turn 2 but the Russian broke too late and had to go through the bollards losing second to Zhou in the process.

The Chinese driver then tried to pass the Williams junior into Turn 2 and Turn 14 but despite the his best efforts Aitken hung onto the race lead.

Zhou looked to have finally got past on Lap 15 but the Renault junior went too hot into Turn 2 with Aitken retaking the lead from Zhou.

To add further misery for Zhou the Chinese driver then lost second place to Mazepin after the Virtuosi driver was slow on the exit of Turn 5.

Aitken finally pitted on Lap 17 for new tyres handing the lead to Mazepin with the stop putting the Brit-Korean back into the race in 11th spot ahead of the struggling Robert Shwartzman.

A lap later Mazepin and the remaining alternative strategy runners pitted for new tyres giving Tsunoda clean air after being held up for several laps by Artem Markelov which had seen Schumacher close in on the Red Bull junior.

Schumacher then took the lead on Lap 20 with the German passing Tsunoda into Turn 2 with a superb switchback maneuver, with Ilott passing Tsunoda for second into Turn 13, the Japanese driver struggling with his tyres.

Shwartzman then lost reverse grid pole courtesy of his degrading medium tires with first Mazepin and then Marcus Armstrong going past the Russian who was dangerously close to falling out of the point-scoring positions.

The Russian was now being hunted down by Dan Ticktum for 10th place with the British driver having a potential after race penalty for a track limits infringement at the start hanging over him.

Ticktum got the move done into Turn 2 with the Russian trying to fight back but went too wide into Turn 4 handing Ticktum the final point on track.

Tsunoda was now closing on Ilott for second place. With just two laps to go the Japanese driver looked everywhere to get past with the laps running out.

The Honda junior then produced a scintillating move around the outside into Turn 4 putting Ilott into the clutches of Ghiotto for the final podium slot.

But no one was catching Schumacher who took his second race win of the season ahead of Tsunoda and Ilott who just hung on for third after a drag race to the line with Ghiotto.

Daruvala hung onto fifth ahead of long time race leader Aitken with Mazepin, Zhou, Armstrong, and Ticktum rounding off the top 10.

Shwartzman’s miserable day ended in 11th ahead of debutant Jake Hughes who was 12th.

Marino Sato had a quiet day with 13h ahead of Giuliano Alesi and Artem Markelov.

Guilherme Samaia and the two Charouz cars of Pedro Piquet and Louis Deletraz the last to finish. 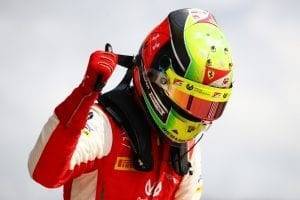