Charouz Racing System heads into 2021 with a brand new driver lineup, with David Beckmann stepping up from FIA Formula 3, and Guilherme Samaia moving from Campos racing to join the Czech squad. 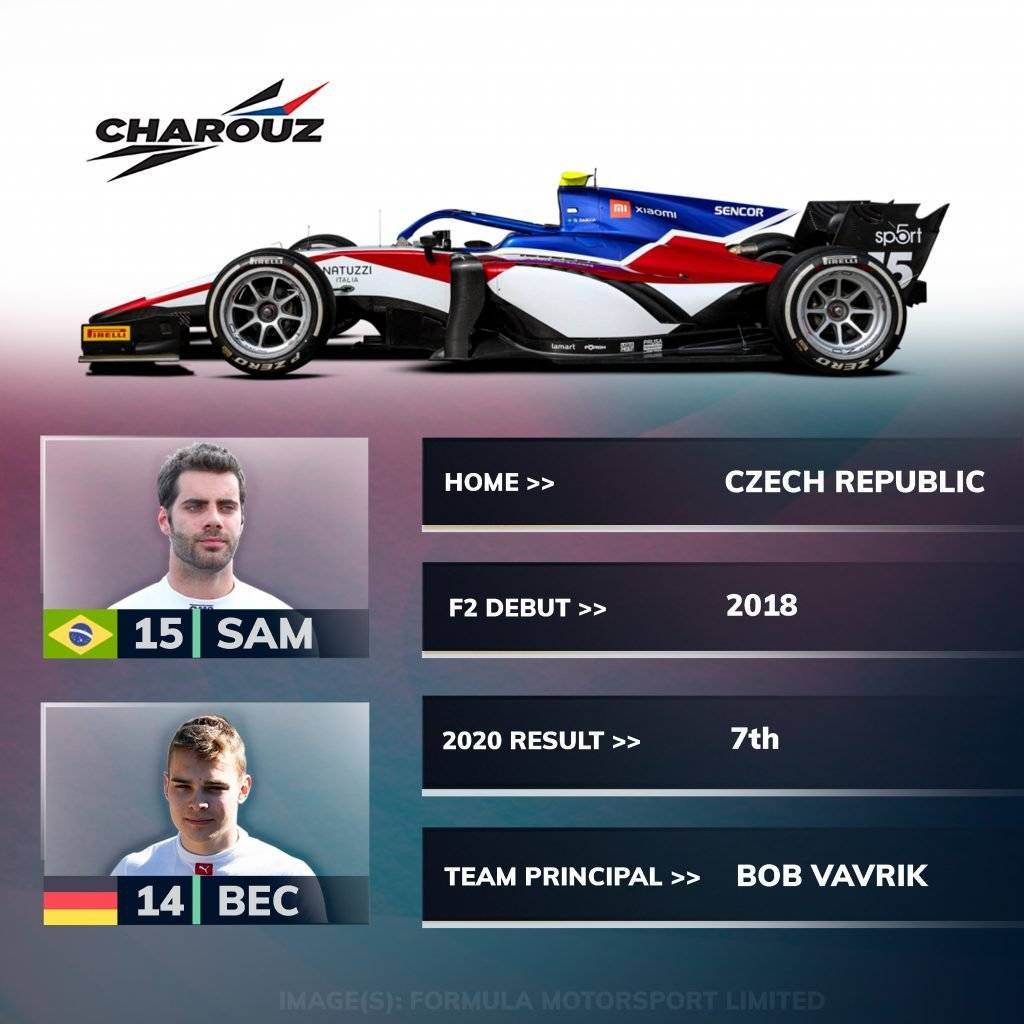 The team takes its name after its founder, Czech driver Antonín Charouz. The team headquarters are located in Žebrák, around 50km southwest of Prague in the Czech Republic.

Since the teams’ inception in 1985, the team has claimed titles across various series, such as the FIA GT3 European championship and the Formula V8 3.5 championship. Their previous alumni include Formula 1 drivers Brendon Hartley & Pietro Fittipaldi, and Formula E race winner Alexander Sims.

Charouz joined the Formula 2 grid in 2018, and their debut was an instant success. Eight podiums, including two wins, marked their best championship run to date, a 6th place finish with 210 points.

They followed this up with another 6th place in 2019, with both Juan Manuel Correa and Callum Ilott making trips to the rostrum.

2020 resulted in 7th place in the Teams’ Championship, however, even then, Louis Delétraz claimed five podiums in the largely disrupted season.

Speaking at the start of 2021, team owner Antonín Charouz stated that the 2020 season, “was probably one of the most difficult in the history of motorsport.”

The team goes into 2021 hoping for more success, and Charouz believes that the team, “have a very good season ahead of us.” 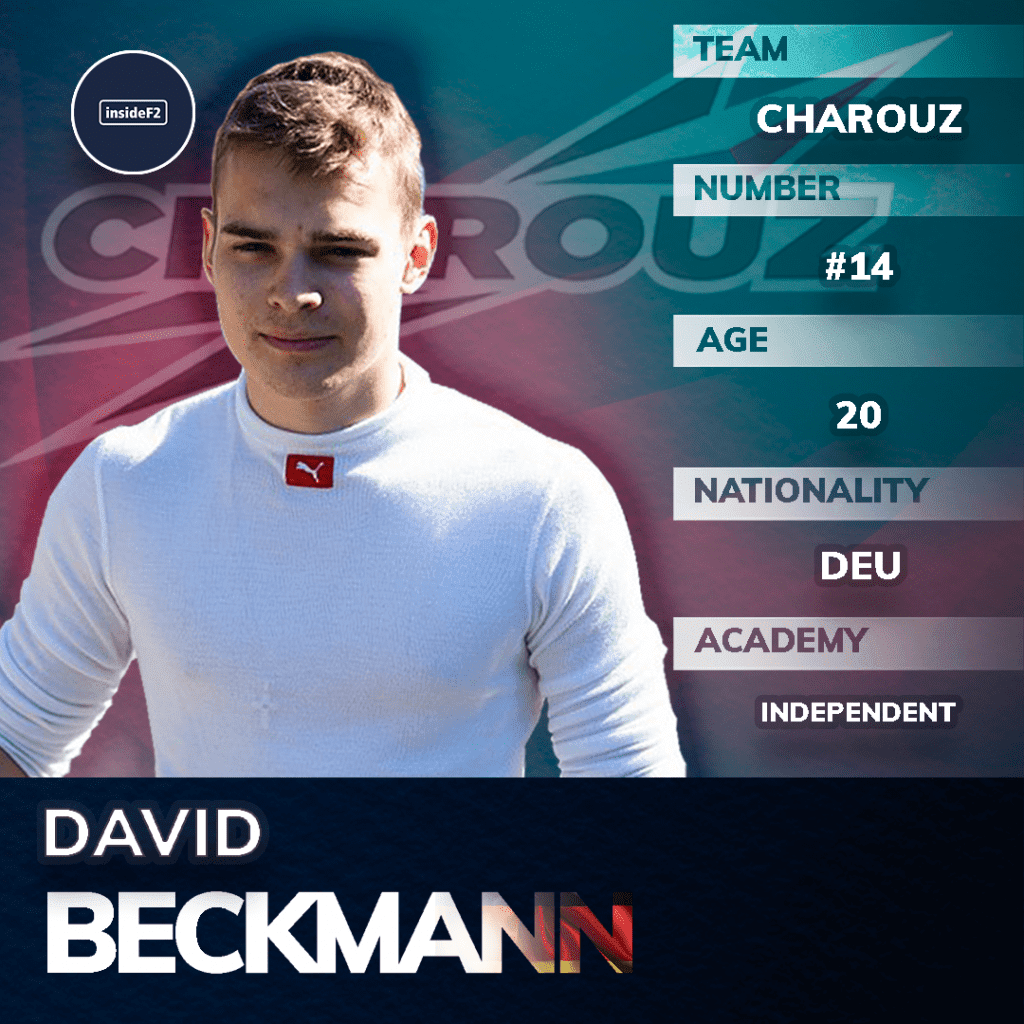 20-year-old Beckmann hails from Iserlohn in Germany and is making his Formula 2 debut this year.

He started his career in karts in 2008 and remained there until the end of 2014. He progressed to ADAC Formula 4 and Italian F4 in 2015, finishing 5th and 4th respectively.

2016 saw him step up to FIA Formula 3 European Championship, but missed the first 2 rounds due to his age. However, he still managed a successful season, claiming podiums at both Zandvoort & Hockenheim, finishing in 15th place overall.

He stayed in Formula 3 for 2017, switching teams midseason after a 3-round pointless run. He managed 7 points finishes after the change, amassing 45 points to finish 16th overall.

2018 brought about a switch to the GP3 series, stepping up with Jenzer Motorsport. However, after four rounds, he moved to Trident, and the move was a positive one. He finished 5th overall, with 3 wins and 137 points.

2019 saw him stay in the rebranded Formula 3 series, switching to ART Grand Prix. However, this season saw less success, with only 20 points, Beckmann choosing to withdraw before the Sochi round.

2020 saw more success – again teaming up with trident. Six podiums including two wins were the highlight of the year, finishing the championship in 6th with 137.5 points.

Speaking ahead of the season, Beckmann said he was,

“Very happy to be able to move on after a successful season in F3” and that it was “exciting to have new challenges ahead and drive a new car.” 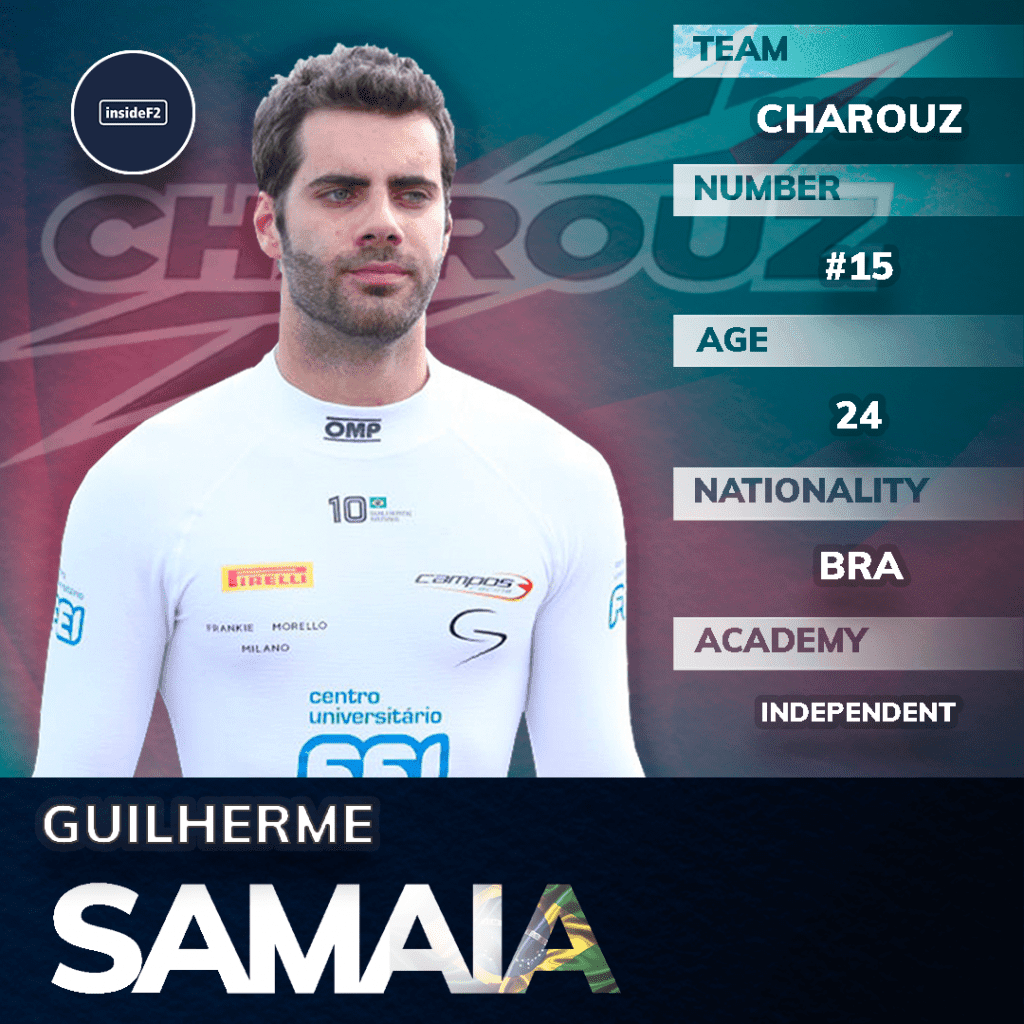 Samaia is no stranger to Formula 2, the Brazilian spending his second year in the championship with Charouz.

Born in São Paolo, 24-year-old Samaia started karting in 2012 at the Florida winter series. The result was enough for him to progress to single-seaters, competing in two rounds of Fórmula Junior Brazil in 2013.

For 2018, he focused on the latter 2 championships, returning to run full seasons in both. Finishing 6th in the Euroformula Open Championship and 5th in Spanish Formula 3 was a success for Samaia.

2020 saw his return to racing, in the Formula 2 series, however it was a relatively quiet season for Samaia.

Joining Charouz for 2021, Samaia said that he was, “extremely happy to be able to join Charouz Racing System for the upcoming season” and that “during the tests, they gave me the chance to show my skills and what I am capable of on the track.”

Speaking of expectations, he stated that, “I’m really grateful to be part of such a great group of people. I’m sure we will be strong, I will do my best.”

How will Charouz fare in the upcoming season with their new driver pairing? 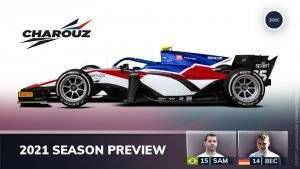