With the FIA Formula 2 Championship set to begin, now is a good time to preview the runners and riders for the 2021 season. We focus on UNI-Virtuosi, and it’s driver lineup of Guanyu Zhou and Felipe Drugovich.

For the past few seasons, UNI-Virtuosi has won plenty of trophies, however, one has eluded them, the driver championship.

They came close to ending that wait in 2020 when Callum Ilott was narrowly pipped by PREMA’s Mick Schumacher after an exhilarating title battle that went down to the final race of the season.

Despite narrow defeats in both the driver and team championships, UNI-Virtuosi had a superb 2020 season.

The team took four wins, three of which came from Ilott and one from Guanyu Zhou, who took his maiden Formula 2 win in Sochi.

Since the season finale, Ilott has departed the team to become Ferrari’s test driver. The Brit has been replaced by hotly rated Brazilian Felipe Drugovich, who had a superb rookie season that saw the Brazilian take three race victories for MP Motorsport.

Drugovich’s teammate, Zhou, begins his third season of Formula 2 with UNI-Virtuosi in what could be his last chance of making the Formula 1 grid with Alpine.

The team’s look is also radically different as they replace the black and yellow for blue and white, with Zhou’s car being painted in the same colours that Alpine will race with Formula 1.

The team is an accomplished outfit and for many, they will be a favorite for both championships again this year. 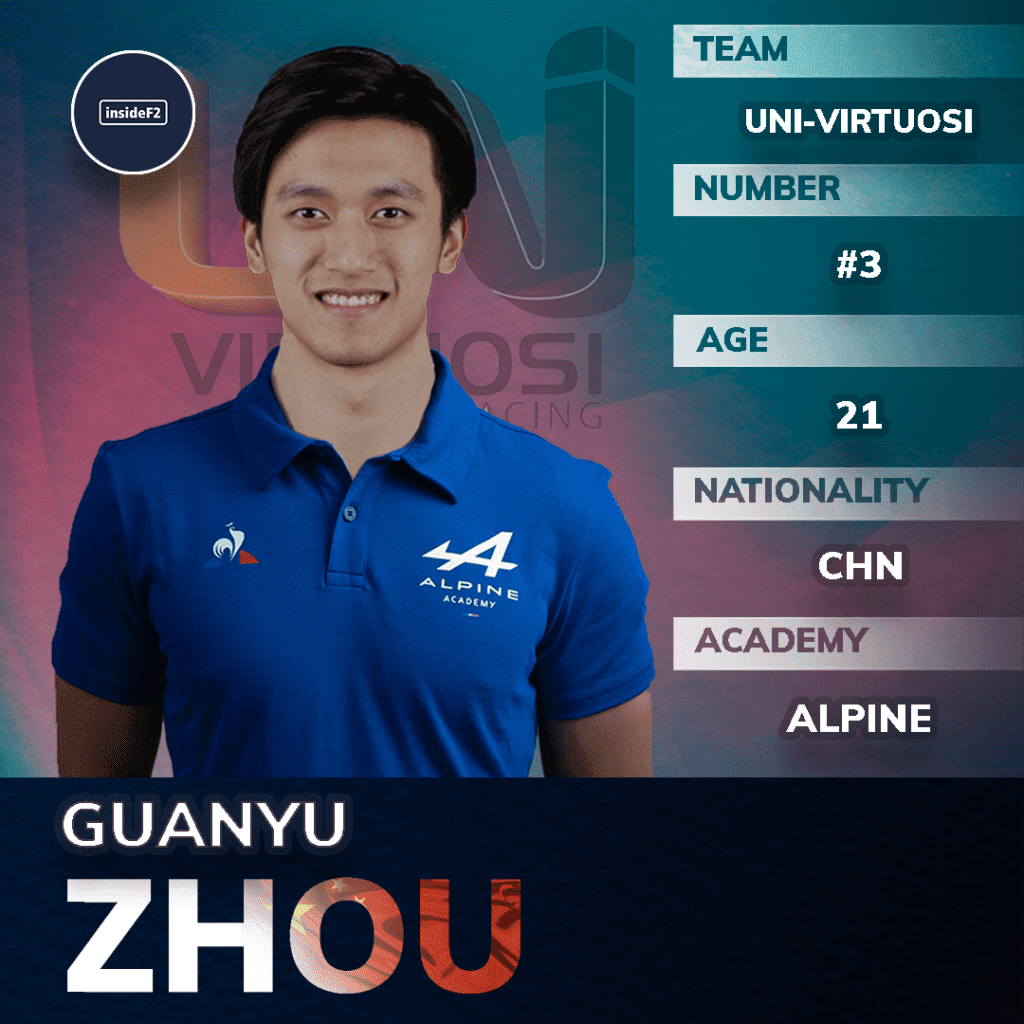 For two seasons, Guanyu Zhou has had a roller coaster Formula 2 career that has seen a fair share of success and some truly cruel luck.

Zhou started his Formula 2 career with five third-place finishes in his rookie season. The Chinese driver was rewarded for his efforts with the Anthoine Hubert reward as the highest placed rookie driver.

2020 saw Zhou enter the season as one of the championship favourites. It looked as if he would be the one to beat after a superb pole position at the first race weekend in Austria.

For most of the Feature race, Zhou seemed destined to add to that pole with a win, but electrical gremlins cost him the race and dropped him down to 17th overall.

Although Zhou rebounded with podiums in the second Austria Feature race and Silverstone, which saw him storm to second place after starting eighth, that first race win continued to elude him.

Bad luck once again cost the Chinese star dearly in the championship, with a technical failure in Monza putting a huge dent in his already slim hopes of winning the title.

However, Sochi was the weekend where Zhou finally broke his race-winning duck after winning the Sprint race.

Although, it was somewhat bittersweet for him following a red-flag ending the race early after five laps due to an accident involving Jack Aitken and his former teammate Luca Ghiotto.

Zhou finished the 2020 season sixth in the driver standings and comes into the 2021 season under pressure to deliver results, knowing that an Alpine Formula 1 seat is potentially up for grabs in 2022. 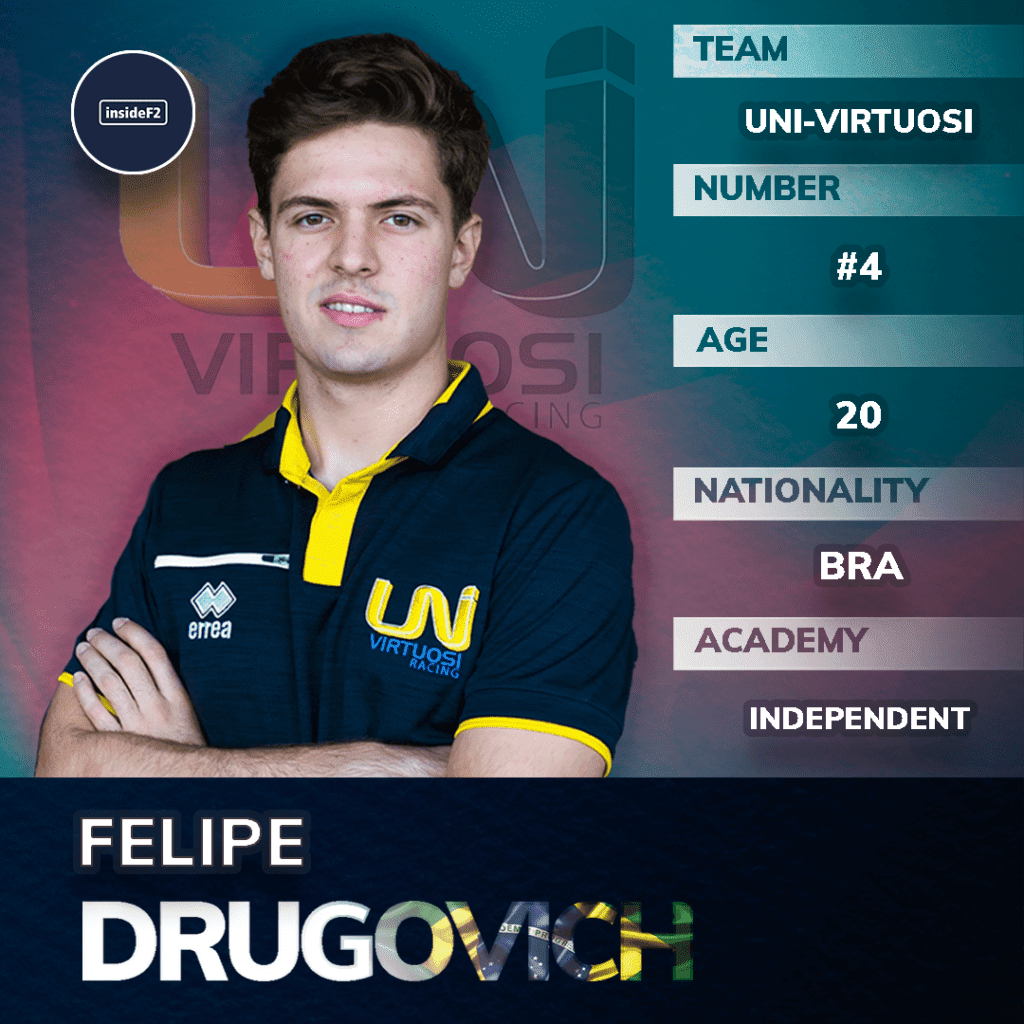 When Felipe Drugovich arrived in Formula 2 off the back of a disappointing 2019 Formula 3 campaign, few expected him to challenge for race wins.

However, Drugovich put all the form books in the shredder, on the first weekend in Austria when the Brazilian qualified a surprising second behind Zhou. Most notably, a rather spacious 19 positions ahead of his teammate Nobuharu Matsushita.

Despite a poor start, Drugovich salvaged eighth in the Feature race and pole position for the sprint race.

This time Durgovich got his start right and took his first Formula 2 win on his second attempt holding off series veteran Louis Deletraz by just over two seconds. This result ended MP Motorsport’s winning drought in Formula 2, which had lasted over three seasons.

Drugovich then continued his good form by picking up points in Budapest, before scoring his first Formula 2 pole position at Silverstone beating Callum Ilott by over a tenth of a second.

With the Brazilian now gaining confidence as well as taking over as MP Motorsport’s de-facto number one, Drugovich took win number two in the sprint race in Barcelona after a dominating performance to put the icing on MP’s cake following Matsushita’s win in the Feature race from 18th on the grid.

After a difficult few rounds, the Brazilian only picked up points with a fourth place finish in the Feature race at Mugello.

Drugovich was back to winning ways at the first Bahrain meeting with a commanding win from second on the grid.

In the second Bahrain meeting, Drugovich secured his fourth podium of the season with third in the Feature race. However, it wasn’t without controversy following extreme defending from Nikita Mazepin which saw the Russian penalised for his manoeuvres.

At the end of a promising first season, Drugovich finished a respectable ninth. He was later signed up by Virtuosi for 2021 after impressing team owner Andy Roche.

The question we are all wondering is… can Virtuosi, with one of the most equally matched driver line ups on the grid, finally do the double and win the driver and team championship this year? 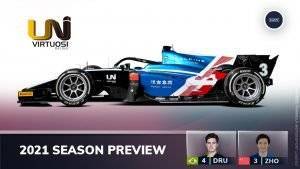