Shwartzman Back on Track

Shwartzman Back on Track

Shwartzman can’t wait to be back

Russian Formula 3 Champion Robert Shwartzman was back on track this weekend as he joined the mixed grid of F2 and F3 stars for the Virtual Monaco Grand Prix (Check out our race report).

After a difficult time off the track with the loss of his Father, we had a smile on our faces to see Robert back on social media and driving his SMP Racing styled Ferarri around at home in Russia.

Following the postponement of real-life racing, the motorsport world has relished in the virtual version. Drivers past and present have kept fans entertained via a mind-blowing array of racing platforms.

Shwartzman however, has been occupied away from the limelight and made his return to public action on Sunday. The driver announced through his Prema media team, “It was great to race at Monte Carlo as I love the track and I’m quite disappointed we will not race there this year, although I still have great memories of my previous time there.”

This being his first outing on what many drivers have commented as a very challenging adaptation of what they do in real life, not much was expected from the Formula 3 Champion but he claimed an impressive seventh place on the grid for the start of the feature race.

Then going into the second race the driver continued to have the issues eventually resulting in him having to retire “At one point, it just stopped working. I’m sorry for today but I really can’t wait to be back to the real thing.”

As lockdown restrictions appear to be eased in many countries Shwartzman is now determined to ramp up his preparations for the late-starting 2020 season, “Now it’s finally time to prepare to race again!”

We at insideF2.com are delighted to see Robert back and in good spirits. We look forward to him and the rest of his driving counterparts getting back on real tracks very soon. 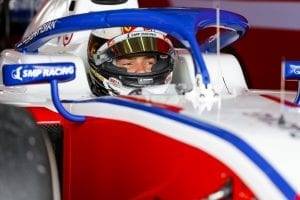