PREMA Racing wrapped up a good weekend with a victory in the Feature Race on their home track with Oscar Piastri, while Robert Shwartzman claims good points for the FIA Formula 2 Championship.

Shwartzman started the race from 12th but managed to get up to sixth and come away from the weekend with a good haul of points.

The Russian was one of the most competitive runners in the second Sprint Race yesterday.

Shwartzman said: “We finished P6 at the end of a difficult race.

“The start was not too bad as I gained a few positions, and the option set was looking pretty good with the balance and grip.

“Then we got a Safety Car, and I made a mistake letting a car pass, but I got him back.

“During the second safety car, we pitted to gain some time, and it was a 2-car stack. Having to pit two cars one after the other, the mechanics did a great job.

“I found myself in a group of drivers having the same strategy and tyres, so I just pushed as much as I could, even at the following restart, when I struggled with the exit out of the last corner.

“Again, I lost a place, but I regained it. In the end, I was holding P5, but I started to struggle with the tyres, my front left was looking pretty bad, and the balance was leaning towards the understeer.

“I had issues in the corners where I needed good rotation. In the end, we were overtaken by Ticktum, who benefitted from the safety car during his pit stop.

“Maybe if I pushed more, I could have had a chance on Daruvala, but the Safety Car came out again with no race left.

“Generally speaking, I can’t deny that I’m disappointed by the weekend. How qualifying happened compromised everything.

“We had the pace to fight for the win in all three races, but my starting positions didn’t allow me to do that.

“We need to look at what is the right approach for qualifying and do our best in Sochi.”

After claiming a good points haul, Shwartzman sits in third in the drivers’ championship. He is still in contention for the title, with the next round being his home one in Sochi, while PREMA Racing now has 262 points in the teams’ championship. 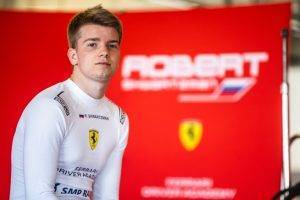