Shwartzman Cruises to Victory in Azerbaijan

Shwartzman Cruises to Victory in Azerbaijan

Robert Shwartzman finally fired up his FIA Formula 2 championship fight after a flawless performance that saw the Russian win Sprint Race 1 in Baku.

In what was an entertaining first race of the day, Shwartzman drove perfectly to lead from lights out, to chequered flag, for his first win of the season. The Russian’s victory never looked in doubt, despite the many retirements and overtakes behind him.

Shwartzman and fellow front-row starter, Jehan Daruvala, were looking for a good result to kick-start their championship bids. Shwartzman got a perfect getaway from the line, immediately covering Daruvala into Turn 1.

There was drama further behind, as Jack Aitken spun on the exit of Turn 1, whilst Feature Race polesitter, Liam Lawson, went straight into the barrier at Turn 2.

Replays showed Lawson receiving a tap from Oscar Piastri, who himself was hit by Felipe Drugovich. The stewards awarded Drugovich with a 10-second penalty, which has compromised the Brazilian’s remaining race weekend.

The yellow flags waving for the incidents quickly turned into a Safety Car.

Alessio Deledda joined the retirees in the second HWA, and the damaged PREMA of Piastri meant both drivers races were over before they began.

The safety car pulled in on Lap 4, and Shwartzman timed his restart to perfection. The Russian got the jump on Daruvala as the action resumed to easily keep the race lead.

Jüri Vips began his challenge through the order by passing Monaco’s winner, Théo Pourchaire, for seventh into Turn 2.

Dan Ticktum was the driver on the march. He braked late into Turn 1 to get past Ralph Boschung for fifth place before passing Marcus Armstrong one lap later to move up to fourth.

Turn 1 was the place to overtake. Championship leader, Guanyu Zhou, eased past Daruvala on Lap 9 at the first corner. The UNI-Virtuosi driver used the slipstream perfectly to complete the move with the additional aid of DRS.

At the front, Shwartzman led Zhou by nearly 4s, with the Russian controlling the race at the front as they approached half distance.

Although Shwartzman had a commanding lead, the other podium positions were far from certain. Ticktum moved up to third on Lap 11 with what looked like an easy move on his team mate into Turn 1.

Daruvala, however, didn’t want to give up the position readily, and he continued the battle entering Turn 2, but the move was complete.

Ticktum’s relentless pace produced a carbon copy of his Daruvala overtake one lap later, this time on Zhou – The Brit earned himself second place.

As the race passed its halfway point, Shwartzman led Ticktum and Zhou with Daruvala, Armstrong and Boschung were in close pursuit, with the latter pair fending off Pourchaire and Vips.

Guilherme Samaia, along with Aitken and Christian Lundgaard all received three-place grid penalties for qualifying infringements. The Brazilian’s miserable weekend continued as he went straight on at Turn 3. The Charouz driver found reverse gear to resume 17th place.

Boschung’s admirable defence of P6 ended with four laps remaining. The charging Pourchaire zoomed past into Turn 1 to gain sixth for himself.

Pourchaire wasn’t done. The Frenchman took Armstrong at the same corner one lap later for fifth. Two positions gained for Pourchaire, but two down for Armstrong as the DAMS driver lost out to Boschung into Turn 3.

Despite Ticktum’s best efforts to close the gap, Shwartzman took a convincing victory to get his championship campaign off and running. Ticktum and Zhou joined him on the podium with solid races of their own.

Daruvala hung on for fourth ahead of Pourchaire, who snatched the fastest lap points on the final lap. Boschung rounded off the top six.

Armstrong and Vips completed the point-scoring positions, whilst David Beckmann and Bent Viscaal will share the front row for Sprint Race 2. 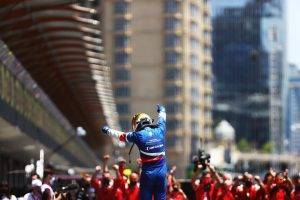