Robert Shwartzman took a commanding victory from Jüri Vips and Christian Lundgaard in the first FIA Formula 2 Sprint Race of the weekend. A blistering start saw the Russian scamper into the lead, which he would hold right through to the chequered flag.

The junior Ferrari driver kept his calm throughout and did not seem at all phased by a hat trick of safety cars, as he managed to build a comfortable lead at each of the three restarts.

Guanyu Zhou fell from the top spot to third in the championship after spinning and retiring on the first lap of the race, seeing his closest title rival Oscar Piastri dance around his stricken UNI-Virtuosi.

The Australian took the top spot in the championship at the end of the race after finishing in sixth position and picking two bonus points for the Fastest Lap.

Pole-sitter Lundgaard made a poor start and fell back to third place, while Shwartzman catapulted himself into the race lead from fourth on the grid with an excellent launch.

The championship leader Zhou spun on the first lap, retiring with his car facing the wrong way at Village and bringing out the safety car. The Chinese driver could not get his UNI-Virtuosi going again and will now endure a miserable Saturday with a last-place Sprint Race 2 start.

His fellow Alpine Academy driver Piastri, just one point off the UNI-Virtuosi driver after taking P1 in Qualifying, made a strong start to move up three places to P7. He narrowly avoided his spinning title rival on Lap 1 in a hugely significant moment for the championship battle.

Several drivers locked up at the restart as they struggled to get temperature into their hard compound Pirelli tyres. Piastri and Liam Lawson engaged in a fierce battle when racing resumed, going side by side through Brooklands and Luffield. The fight continued as they went two abreast into Maggots and Becketts, with Lawson eventually holding his position while Ticktum closed in behind.

The racing was halted for a second time as Alessio Deledda spun his HWA Racelab on Lap 4, with another safety car callout as his car was recovered.

Piastri resumed hostilities at the second safety car restart, shooting up the inside of Lawson to take sixth place, capitalising on Zhou’s misfortune.

At the front, Shwartzman built a gap of over a second to Vips behind, while at the other end of the top 10, MP Motorsport team mates Richard Verschoor and Lirim Zendeli battled for reverse grid pole for the second Sprint Race.

The Safety Car then struck again as Guilherme Samaia beached his car in the gravel, with a small group of drivers opting to pit for fresh rubber during this third slowdown.

Jack Aitken suffered an unfortunate pit stop, as his front right tyre locked as he tried to turn out of the pit box, but could get going again following intervention from his pit crew.

Dan Ticktum narrowly avoided contact with Liam Lawson at the third restart as he tried to take P7 from the rookie Kiwi, who was on the defensive once again but managed to hold off the Carlin driver.

Verschoor had briefly put the MP Motorsport battle on hold, rolling the dice by pitting for fresh mediums, dropping back to fourteenth in the process.

The Dutchman was flying on his new tyres, making a brave move on David Beckmann into Copse, and he was swiftly back on Zendeli’s gearbox. At Stowe on Lap 19, Verschoor finally took P10 from his team mate, and reverse grid pole for the Sprint Race 2.

Shwartzman had built another gap from the third restart and looked in control throughout. The PREMA driver was completely untroubled by Vips behind despite a late surge of pace from the Estonian.

Lundgaard showed his appreciation of the British fans after a great turnout early on a Saturday morning. This weekend’s capacity crowd can look forward to even more F2 action with the second Sprint Race this afternoon.

To keep up with all the action, and all of the twists and turns in the fight for the Formula 2 title, make sure to visit InsideF2.com and follow us across our socials! 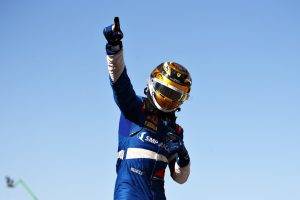