Shwartzman drives his heart out to win in Hungary!

Shwartzman drives his heart out to win in Hungary!

PREMA’s alternative strategy meant both their drivers, Shwartzman and Mick Schumacher, finished in the top three.

Pole sitter, Callum Ilott had a perfect getaway to keep his first place on Lap 1 of 37.

Dan Ticktum shot to second place in the first corner fighting for the lead on the first lap. UNI-Virtuosi driver Ilott hung on and Ticktum settled for second.

Guanyu Zhou faded down the order from third place to eighth on the first lap.

Shwartzman had a fantastic start from the midfield (11th), reaching sixth place within the first few corners of the Formula 2 Feature Race.

The Trident pair of Marino Sato and Roy Nissany, after picking up a one-place grid penalty for a tyre usage infraction the previous day, started in 20th and 21st.

This didn’t make much difference to their race as the two team-mates came together on second lap.

Nissany overshot Turn 1, colliding with his Trident team-mate, triggering the Safety Car. Both retired from the race.

It was a clean getaway after the Safety Car returned to the pits, once again Ticktum challenging for the lead on Lap 3.

Christian Lundgaard and Hitech’s Luca Ghiotto came together as Lundgaard clipped the rear right tyre of the Italian, breaking his front wing in the process.

Ghiotto seemed to react late to Lundgaard’s move on him. However, Race Control investigated and took no further action.

Lundgaard returned to the pits to repair the damaged car.

BWT driver, Artem Markelov was seen heading straight into the wall, triggering the Safety Car immediately after its return.

Marcus Armstrong collided with his team-mate, who also suffered damage in the incident.

Armstrong limped back to the pit lane but stalled just outside of the pit box to prolong his agony.

Ticktum reported fluid on the track that was dangerously on the white line. He took an early trip to the pits trying a different strategy.

Ilott followed suit to cover Ticktum off, on the following lap, getting out ahead of the DAMS driver.

Campos driver, Jack Aitken attempted to pass Shwartzman on the restart, fighting for fourth place. The Russian and Brit benefitting from Lundgaard and Ghiotto’s collision.

While Mick Schumacher was bagging the fastest lap, Armstrong retired from the race.

Ticktum, with tyres up to temperature, the Brit overtook Ghiotto on Lap 11.

Schumacher ran long, and bolted out ahead of the pack to regain first place after his first pit stop.

With his tyres not being up to temperature, Ilott soon retook his first place from the German.

Ghiotto pressured Ticktum on Lap 16, taking eighth place from the Brit under DRS.

Shwartzman stayed out, leading the race on Lap 17, his front left tyre badly degraded, with a long way to go in the race.

Carlin’s Tsunoda pitted with a broken front wing after a failed overtake attempt on Turn 1.

Ticktum complained of no grip on his medium tyres, losing his ninth position to Delétraz on Lap 19.

All drivers were struggling with degradation by Lap 20.

Ticktum complained about his tyres on Lap 22, stating it was like driving “between a boat and a rally car.” Frustratingly dropping down the order.

Shwartzman, struggling like the others, was still in control on Lap 24, leading the pack by almost 14 seconds – being encouraged by his team over the radio, stating he had just few laps to go for his next set of tyres.

With massive understeer, the PREMA driver pitted on Lap 27 for the softer compound, having 10 laps ahead of him to fight for the win.

He emerged behind Ilott but locked up on cold tyres, that saw Ghiotto glide past him.

Despite the mishap, Shwartzman soon caught the leading pack,

The experience of Ghiotto saw the Italian hold off the Russian until Lap 30. Shwartzman made his move, making it stick, soon catching Ilott to take second place.

Ilott’s tyres were fading fast and he slowly drifted beyond the reach of the podium.

PREMA, managing their tyres by staying out, saw both drivers fighting for the lead In the closing stages.

Schumacher held off Shwartzman for as long as he could, but had to surrender to his team-mate on Lap 31.

To prepare for the drop-off, Shwartzman raced ahead to create as big a gap as he could, gaining over 19 seconds by Lap 37.

Nikita Mazepin’s maiden trip to the podium saw him catch and overtake Schumacher on the second to last lap, as the German’s tyres dropped off rapidly.

Starting in 11th position, and on a strategy he wouldn’t have chosen, Robert Shwartzman won his second Formula 2 Feature Race!

All the strongest guys were in front. The strategy worked out really great. Every lap was on the limit. The car was mega. Thanks to the team.

From 16th place on the grid Mazepin finished in second!

I wasn’t sure we were looking that good. It was unexpected and I’m extremely happy.

Schumacher clung onto third place, making his mark on the Formula 2 championship.

We did the maximum that we could. We were quick on the Option (tyre). I tried to manage my tyres. It was difficult to try and compete. Some good points to me. The season’s long and I’m looking forward to the next races.

Tyre choice and strategy was the winning combination at the 2020 Hungarian Feature Race.

The Russian National Anthem rang out above the Hungaroring with Shwartzman standing proud on the top step. A deserved win for the ‘Driver of the Day’. 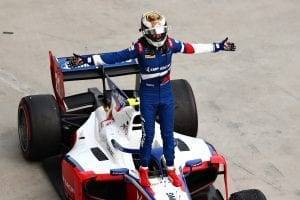