Shwartzman: PREMA the Best Team There is

Shwartzman: PREMA the Best Team There is

As the 2021 FIA Formula 2 season approaches the finale, Robert Shwartzman has been reflecting on his own campaign, and the PREMA team’s championship crusade.

“Both championships are important, as a team and as a driver. The team have performed really well. Especially starting from last season, we picked up a really good pace and the car was always competitive.”

Shwartzman took a while to get into gear this season following disappointing retirements in the first two weekends in Sakhir and Monte Carlo. His qualifying sessions haven’t clicked into place, his best results being this weekend in Jeddah (p2), and a Pole position in the Principality.

His other qualifying positions have been seventh and below.

“Unfortunately I struggled quite a bit in the qualifying but it seems that only now I found the idea of what was the issue, but overall I’m very happy with the team.”

The Russian driver won the Formula 3 Championship for PREMA in 2019 before graduating into Formula 2 last season. Joining the team in 2018, he’s clearly matured as a driver with the Italian outfit.

“It’s my fourth year with PREMA. It feels a bit sad to leave them next year, I will definitely miss them. It’s been a lot of fun.”

Shwartzman’s departure hasn’t been widely discussed, and it comes as a surprise to many. The PREMA driver didn’t digress his future plans, but his words express a finality to their F2 partnership:

“For sure they deserve the Teams’ Championship because in my opinion it’s the best team there is – As in Formula 3 and Formula 2.”

Furthermore, there’s still a mathematical possibility the F3 Champion can win the Formula 2 title this year, and he remains hopeful of his chances:

“If a miracle’s going to happen, and I manage to get the Drivers’ Championship, then I will be extremely happy, because not many people expect it.

“But my target is to look forward, and I will do my best, what I can, to at least shorten the gap.” – Meaning the gap between himself and teammate, Oscar Piastri), who’s dominated the standings in his Rookie season. 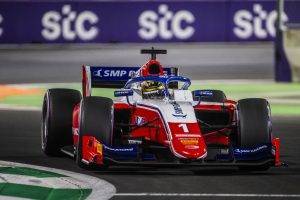