The Russian driver appeared to be set to secure Pole position in the Qualifying session, as he looked to be the most comfortable in the car – relishing the fast sectors and corners.

Following a marginal error on his final run, the Russian was beaten to Pole by his teammate and Championship leader, Oscar Piastri:

“Last lap I did a tiny mistake in the last corner, giving me a P2, not pole.

“I pushed too much on the rears. I felt that they were pretty much on the edge. I broke too early and pushed more into Turn 1, and I feel like I lost the 10th I needed to get pole.”

“It’s good and sad at the same time.

“When you’re pushing at the top limit you expect to do a proper lap and you do a tiny mistake. At the end it costs you a pole position. It’s a bit painful, I must admit, but it’s something to learn from.”

On a positive note, the PREMA driver praised the new Jeddah Corniche circuit stating how nice the track is, and how Free Practice went well for him.

Looking ahead to tomorrow’s sprint races and Sunday’s Feature Race, with a view to making up places to maximise his points weekend, Shwartzman reflected:

“Going into Quali I tried to put everything together. Its still a good result and it’s still front row. Tomorrow I want to get as many positions as possible.

“It seems pretty difficult to overtake with high speed corners. Maybe it’ll be easier in Race 3 with different race strategies and tyre compounds.”

Satisfied and confident in his car and natural adaptation of the new Jeddah circuit, he concluded:

“The speed was really good. The whole run in Quali we were the quickest, and we just need to apply that speed into race mode.” 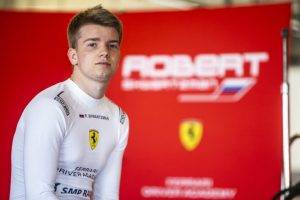