Robert Shwartzman topped the times in Free Practice for the second round of the FIA Formula 2 Championship in Monaco.

For the first time since 2019, we got to see F2 cars drive around the streets of Monte Carlo, in what was a very interrupted Free Practice Session featuring two red flags.

Prema driver Shwartzman ended the session quickest in the final few minutes with a competitive time of 1:22.041, getting himself off to a good start, in what has been a difficult season so far for the Ferrari Academy driver.

Carlin’s Dan Ticktum proved to be the Russian driver’s nearest rival, ending the session 0.523s behind him. Hitech’s Jüri Vips completed the top three after a short spell at the top of the times.

Fourth place went to Brazilian driver Felipe Drugovich, who initially set the pace for the grid after the second red flag. Prema’s Oscar Piastri finished in fifth behind the UNI-Virtuosi driver.

MP Motorsport’s Richard Verschoor, who was only announced to be racing for the team in Monaco a few days ago, finished 11th with his teammate Lirim Zendeli just behind in 12th.

Jack Aitken, who announced his surprise return to the grid this week, sat comfortably in 13th place for HWA Racelab, with rookie Théo Pourchaire finishing 14th.  Jehan Daruvala for Carlin and David Beckmann for Charouz set times for 15th and 16th positions respectively.

Guilherme Samaia was 17th quickest, ahead of championship favourite Christian Lundgaard. Petecof finished 18th ahead of Viscaal, Deledda and Sato who rounded off the top 22.

As it was the first time the drivers were out on the street circuit in almost two years, it was unsurprising that a red flag was brought out at the start of the session after Trident’s Marino Sato stopped on the exit of the pit lane.

The session was red flagged once more when Campos’ Gianluca Petecof had an engine blowout, causing a pretty serious fire which sent smoke billowing up the streets of Monaco.

The last 15 minutes of the session saw a yellow flag bring out the Virtual Safety Car, after Trident’s Bent Viscaal went wide and put his car into the barrier in Sector Three.

Drivers used much of the second half of the session for qualifying simulations using the ultrasoft tyres.

The cars will be back on track at 12.20 (UK time) for Qualifying. Don’t forget that qualifying is different for this round, but we have you covered with our qualifying guide which you can find here. 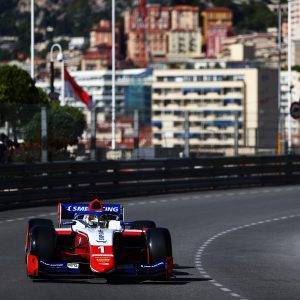