Robert Shwartzman recovered from a steward’s penalty in the first FIA Formula 2 Sprint Race, to take a podium in the second Sprint.

He was deemed to have crossed the pit lane exit line, and received a 5s penalty.

“The result today is a feeling that this morning, I didn’t do my best with the slight mistake at the start. The penalty was deserved, because it is in the rules. It is what it is. I will not do it again tomorrow.

“It was disappointing because the car felt good, and the pace was good.”

The PREMA cars look to be having yet another good season and Shwartzman is confident in the car’s reliability and pace:

“It was doable to have three podiums this weekend with the race pace.”

Despite qualifying in P12 for tomorrow’s Feature Race the Russian feels like another podium is within reach as the PREMA car is competitive and strong:

“I’m pretty sure I have the pace to sit on the podium tomorrow from P12.”

Shwartzman’s team mate Oscar Piastri is currently leading the Drivers’ Championship but is still within range of being caught. Although he is in his Rookie season, Shwartzman has an equal respect for him and is even open minded in learning from the Australian.

“Oscar is really quick and a really competitive team mate, and he’s doing a good job. Unfortunately I make more mistakes than him especially in qualifying.

“Race performance wise I’m stronger than him. But he’s very close. It’s very good to have such a strong team mate, as some of the things he’s doing are better, so there’s always something to learn.

“Obviously, it’s just the second half of the season and nothing is lost yet. I’m going to do everything I can to beat him in the championship.”

The 2019 Formula 3 champion is showing maturity in his reflections, and he’s just as realistic about his future and what he needs to do to become a better driver:

“I still have to learn and improve myself in Formula 2, I have the second half of the season to do that. Only then can I think a little more about a future in Formula 1.

“This season is tight as there’s only one seat left. But there’s still a future. There’s still more years. My target is to do my best in Formula 2, get the best result as possible, and get the championship and then see what’s going to happen.”

Shwartzman undoubtedly has his head on his shoulders and the world at his feet. 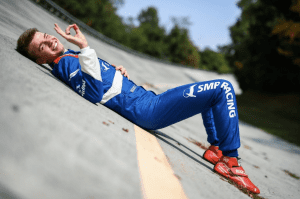