Robert Shwartzman dominated in a lights to flag victory in the Bahrain Sprint Race to keep him mathematically in the Formula 2 title fight.

Shwartzman took his fourth victory of the year after victories in Austria, Hungary and Belgium, the most of any driver this season.

Starting on reverse grid pole after finishing eighth in yesterday’s Feature Race, Shwartzman had appeared to be struggling at the beginning of the weekend. The PREMA driver credited his victory to progress his team had been making in recent races.

He said: “We struggled with pace, especially in qualifying and yeah I’m very happy to be here. I mean we did a big step, big work and very proud of my team. They did a really good job.”

At lights out, the Russian driver did not get the best start, allowing Yuki Tsunoda to dive through and attempt to nab the inside line at Turn 1.

However, Shwartzman was able to defend the position and began to pull a gap from the rest of the pack who were dueling for positions.

After Theo Pourchaire’s fire extinguisher went off triggering a safety car, he was able to hold the lead on the restart and cruised his way to victory.

One of the key components of his victory was his tyre management, especially given the safety car and many drivers needing to box for new tyres.

Speaking about his race, the Ferrari Academy driver said: “Yeah there were a few moments at the beginning when I didn’t really expect the Safety Car to be that quick.

“The tyres got really cold really quickly as well, so it was really easy to lose the car […] For a few laps, they were staying in the same rhythm, staying behind me, and then I slowly started to pull away.

“I just tried to focus on my driving, to not make any mistakes, and to finish the race.”

His victory today sees him jump to fourth in the drivers’ championship after falling to sixth after yesterday’s Feature Race.

Shwartzman’s team mate Mick Schumacher finished in seventh and they have helped to extend PREMA’s lead in the teams’ championship on 364 points, ahead of UNI-Virtuosi on 316.5 points.

Formula 2 continues in Bahrain for the final title deciding weekend, with the unfamiliar territory of the Bahrain Outer Circuit looming. Five drivers: Schumacher, Ilott, Mazepin, Shwartzman and Tsunoda are still in contention and as we saw today, anything can happen.

Speaking about next weekend, Shwartzman said: “The track is going to be very interesting because it’s very short and it’s like a NASCAR track. It’s like an oval.

“There will be a lot of overtaking, and everybody is going to be very close to each other.” 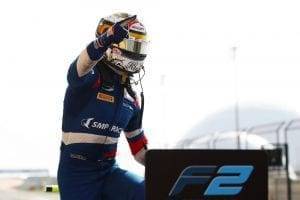