Robert Shwartzman’s Formula 2 Championship charge continued with a dominant win in the Sprint Race in Belgium.

The Russian driver started fourth on the reverse grid, but was able to capitalise on the incidents around him.

Firstly, Feature Race winner Yuki Tsunoda clipped former Championship leader Callum Ilott on the first lap, forcing the British driver into a spin and an early retirement from the race.

The Russian driver’s prospects only improved further after Nissany and Ticktum’s battle culminated in a collision on the outside of Les Combes. Ticktum was forced wide and whilst the car bounced back on to the track; he collected the Trident driver, who was flung into the wall.

The British driver was able to continue, albeit with damage.

On the incident, Shwartzman said: “Today, I had a decent start and was P3 out of Turn 1. The guys in front were quite aggressive so I was being a bit cautious with them. They crashed and collided, and I used that opportunity to get past them.”

He then assumed the lead and controlled the race superbly, building a 9 second gap by the end of the race to teammate Mick Schumacher.

Shwartzman said: “I have finally gotten back to first place – it had been a while since Hungary. I am really happy, and I want to say a big thank you to the team. They did a great job and the car has been good all weekend.”

PREMA were certainly the scene stealers on Sunday. After taking a 1-2 finish in the Formula 3 race with Logan Sargeant and Frederik Vesti, Mick Schumacher continued a strong weekend to record back-to-back podiums.

A patient race for the German driver, he was able to pass the damaged DAMS of Dan Ticktum and hold on to second place.

PREMA regain the lead of the team standings with 238 points, with UNI-Virtuosi in second with 214 points after Guanyu Zhou took third place in the race.

Shwartzman will be wanting to continue this strong form into Round 8 at Monza.

He currently leads the Championship by 10 points to fellow Ferrari Academy driver Callum Ilott. However, with Tsunoda and Schumacher gaining ground on the leading pair, the Championship is still all to play for. 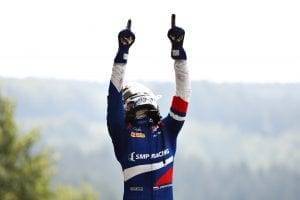