Robert Shwartzman took the championship lead with a comfortable win in the Formula 2 Sprint Race in Belgium.

The Russian driver took advantage of a crash between Roy Nissany and Dan Ticktum to inherit the lead and never looked back.

It was the perfect race for Shwartzman, taking maximum points as his championship rivals struggled.

He was joined on the podium by teammate Mick Schumacher and Guanyu Zhou, who recovered from a slow start.

Zhou got bogged down off the line, allowing third placed Ticktum to take the lead. Polesitter Nissany fought back, repassing the DAMS at Les Combes.

After scoring just a point on Saturday, Callum Ilott’s weekend soon got worse. In the middle sector, he was punted in the rear by Yuki Tsunoda. Ilott spun and had to retire, with the safety car making an appearance and Tsunoda received a five-second penalty.

At the safety car restart, Ticktum looked to go around the outside of Nissany. The Brit got on the kerb, lost control and hit Nissany, putting the Israeli driver into the barrier and out of the race.

Ticktum rejoined the track in second, gifting the lead to Shwartzman as the safety car came back out.

The race restarted again on Lap 7 and Ticktum was struggling immediately. Louis Deletraz passed Ticktum around the outside at the Bus Stop chicane, but moments later Ticktum repassed on the Kemmel straight.

As Ticktum held up those behind, Shwartzman was checking out up front.

Zhou moved himself up to third at the Bus Stop chicane, with Schumacher and Nikita Mazepin following through, relegating Deletraz to sixth.

Zhou’s time on the podium didn’t last, as Schumacher took advantage of the slipstream into Les Combes and passed for P3.

At the end of Lap 11 Ticktum suffered a massive lock-up, inviting pressure from behind. Schumacher accepted, easily passing his old rival and making it a PREMA 1-2.

Zhou went for a move on Ticktum at Blanchimont but couldn’t make it stick. Half a lap later though, Ticktum couldn’t stop the move and the Chinese star moved up to third.

As the race came to a close, Ticktum’s defensive ability waned. He was passed by both Mazepin and Luca Ghiotto in quick succession, before losing out to Deletraz.

Ticktum fell out of the points as he was overtaken by Yuki Tsunoda and Christian Lundgaard.

But nothing could stop Shwartzman, who led home Schumacher and Zhou. Mazepin secured fourth ahead of teammate Ghiotto and Deletraz.

Tsunoda finished seventh on track, but that penalty for the Ilott incident saw him drop to ninth, promoting Lundgaard to P7 and Artem Markelov to P8 for his first point of the season. 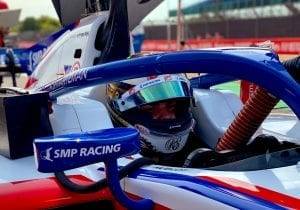