In his home race at Sochi, Robert Shwartzman made a promising drive in the challenging conditions to take a podium for PREMA Racing.

The Russian managed to fight his way to third despite the tricky conditions thanks to the rain that fell throughout the morning; it even flooded the support pits.

After a long wait, the rain finally cleared. Sprint Race 1 was moved to later afternoon and finally got underway, while the second Sprint Race was called off.

What made the race trickier was the one dry line on the track and all the drivers on slick tyres.

Shwartzman gained a position straight off the line and quickly struck back when a small mistake cost him a spot later in the race.

The Ferrari Driver Academy member got valuable points for the championship, while neither of the Top 2 claimed any points.

Shwartzman said: “Today reminded me a lot of 2019, the atmosphere is great with so many fans, it’s unbelievable. I just focused on driving a good race.

“I was hoping for a rolling start because I was sitting on the wet side of the grid, and with a standing start, that would have been extremely tricky.

“After the rolling start, I was careful in the opening laps because you never know how much you can push, where you can brake or where you need to go in those conditions.

“After that, we started to pick up the pace. I also made some mistakes, which made my life harder.

“Hughes passed me at some points but quickly got him back, then I tried to catch Vips, but it was really easy to make mistakes.

“At some point, I was going for the fastest lap and lost the car on a wet patch; it was quite a moment.

“I’m happy to have finished a challenging race in P3. It’s good points and a podium, and I was delighted to see the fans cheering!”

Oscar Piastri had a more demanding race, starting from the fifth row after claiming pole for the main Feature Race.

The Australian had an excellent chance to extend his championship lead as rival Guanyu Zhou made a mistake on his lap to the grid so that he couldn’t take the start.

Piastri proved competitive, but a couple of close calls with spinning cars in front of the driver forced to take avoiding action, costing him some momentum.

The Alpine Academy driver came close to the points but he couldn’t make it into eighth, eventually finishing ninth.

Piastri said: “It wasn’t a great race, and it was always going to be tricky given the conditions and starting from 10th.

“I think I made a few too many mistakes, which is unfortunate, and I could have got a couple of points, but it is what it is.

“We will be starting out front tomorrow, and I think the pace is quite good.

“We just got stuck behind slower cars. Tomorrow will be a different story, and I’m looking forward to the race.”

PREMA Racing will want another podium tomorrow, with Piastri starting from pole position and Shwartzman starting in seventh. 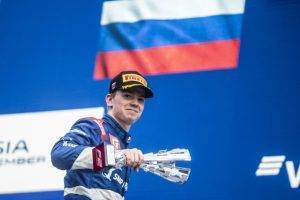