Robert Shwartzman took victory at the first Sprint Race of the Formula 2 round 4 at Silverstone for PREMA Racing.

The Russian driver got a brilliant start from fourth on the grid and went for the lead into the first turn. Shwartzman mastered all three safety car restarts to take his second win of the season.

Sprint Race 2 saw the Ferrari Academy driver start from 10th but stuck in traffic after improving a couple of positions. After pushing hard with nothing to lose, Shwartzman spun and lost out on points as he dropped to 15th.

Shwartzman said: “I’m extremely happy with the win in race 1 when we got our redemption from last year.”

“The start was really good, even better than expected. The set-up and warm-up were great, and even the tyres got into temperature, so I moved to the inside, and I realised that I was P1.”

“ I opened up a bit of the gap, and then the re-starts after the safety car situations went well too, so the car behind never got the opportunity to get close enough.”

“Race 2 was not the one we wanted as we did not score points. The start was quite good, but the safety cars created a big pack, and in that position, it’s really difficult to overtake.”

“I tried to get close to the car in front, but I clipped a kerb and lost control. It cost us no points, though, and we learned something.”

“Tomorrow will be a different race with the pit-stop. I hope to get another good start and then, with the right strategy and pace, to fight for the podium.”

Teammate Oscar Piastri also had an impressive day after taking pole in the Feature Race during qualifying.

The Australian started from tenth on the reverse grid for Sprint Race one, climbing up to sixth.

For the second Sprint Race, Piastri started fifth and put in yet another clean performance to move to fourth place.

The Alpine Academy driver also managed to secure the fastest lap in both races, claiming four bonus points and taking the lead in the championship.

Piastri said: “I’m very happy with today’s results as we were strong in both races and all conditions.”

“In race 1, we had a quick start and made a few spots straight away, and then got past Lawson to take P6. After that, we were just stuck in a DRS train, and I couldn’t really make any more progress forward.

“In race 2, I had a pretty average start but made a good move towards the end to take P4. The pace was mega in clean air so that I could set the fastest lap in both races.”

“I don’t think there was really much more we could have done today. Bring on tomorrow!”

Both PREMA drivers will hope they can get more good results in the Feature Race tomorrow when they head back onto the British track. 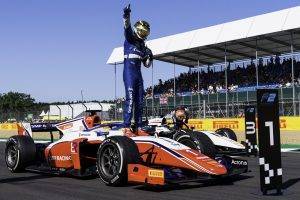