Robert Shwartzman showed that he had quickly mastered the new Jeddah Corniche circuit after managing to set the fastest time of what was a chaotic opening Practice session.

The first Formula 2 session at Jeddah was a fair from straightforward one, as delays and red flags marred the session.

Four drivers made their maiden Formula 2 appearance in Practice at Jeddah. Former Trident teammates Jack Doohan and Clement Novalak were paired up at MP Motorsport in place of Lirim Zendeli and Richard Verschoor after the pair had run out of funding following the Sochi weekend.

Brit Olli Caldwell was in at Campos Racing replacing German David Beckmann, who was again without a drive in the series, whilst hotly rated American talent Logan Sargeant would make his long-awaited Formula 2 debut at HWA-Racelab after Jake Hughes’s two-race stint came to an end.

The start of the session was delayed by over an hour due to operational issues causing some of the drivers to get out of their cars.

But at 14:35 local time, the session finally got underway with the field crawling out of the pits and onto the brand new Jeddah Corniche circuit.

Doohan and Novalak were the first two drivers to try and set a quick lap time with the MP pair, making full use of a clear track to get used to the Dallara F2/18, as Novalak set the faster time of the pair with a 1:48.217.

Street circuit specialist Ralph Boschung set the early pace in Practice, setting a 1:45.441 that was over a second quicker than DAMS’ Marcus Armstrong and Shwartzman.

Boschung then improved on his next run, breaking into the 1:44s along with Shwartzman and Jüri Vips, albeit the Estonian was seven-tenths down on Boschung’s time.

Sargeant’s opening session in Formula 2 came to an early end after the American lost the rear of his HWA-Racelab machine at Turn 21, slamming into the barrier and bringing out the red flags in the process.

After just over 20 minutes gone in the session, Boschung led Shwartzman and Vips with Lawson, Theo Pourchaire and Marcus Armstrong completing the top six but had still yet to break into the 1:44s.

Vips tested the limits of his Hitech at Turn 17, completing a full 360 after going too hot into the corner, but luckily for the Estonian, he managed to keep the engine running and got back underway.

Alessio Deledda completed HWA’s morning of misery after kissing the barrier at Turn 1, deranging his right rear suspension and ending his session with just over 10 minutes to go.

The Virtual Safety Car was put out by race control for a short period of time to enable the marshals to clear away Deledda’s stricken HWA.

With over three minutes left in Practice, Boschung upped the pace again with a 1:42.807, over three tenths faster than Shwartzman and Armstrong.

But on his last run, Shwartzman finally managed to topple Boschung from the top of the timesheets with a 1:42.623 over a tenth quicker than Boschung and  Ticktum who was three tenths down on the Russian.

Felipe Drugovich finished the opening Practice session in fourth ahead of Armstrong and Vips whilst newly confirmed Alfa Romeo Racing driver Guanyu Zhou managed the seventh quickest time, three places ahead of championship leader Piastri who could only manage 10th.

Doohan was the fastest of the rookies with the eighth quickest time, ahead of Caldwell and Novalak, who finished their first F2 practice sessions in 15th and 16th, respectively, whilst Sargeant finished his shortened session 21st. 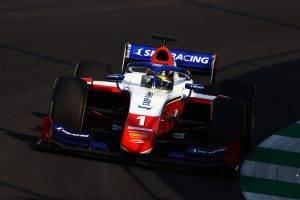