With freezing ambient and track temperatures making Spa chillier then usual, the drivers faced a challenge to warm their tyres in order to get a good amount of track time in before Qualifying.

Before Practice had formally began Giuliano Alesi had already hit trouble on the exit of La Source with the Frenchman spinning on cold tyres into the barrier damaging his front wing and putting his session to a swift end and with it the red flag came out.

After a delay of just under three minutes to remove Alesi’s worse for wear BWT-Racelab car, the session restarted with Mick Schumacher leading the convoy out of the pitlane to begin Practice after the delay.

Nobuharu Matsushita’s bad luck resumed at Spa as his MP mechanics worked on the back of his car delaying the Japanese driver in the pitlane as he waited for his team to eventually get the car fixed.

PREMA’s drivers were quick out of the gate with Shwartzman going fastest with a 1:58.874 just over two-tenths quicker then teammate Schumacher with Yuki Tsunoda third fastest four-tenths behind Shwartzman.

Shwartzman further improved his time by just over six-tenths to continue his reign at the top of the teamsheets as Tsunoda and Nikita Mazepin joined the Russian in the top three ahead of Felipe Drugovich, Jehan Daruvala and Jack Aitken.

Tsunoda also suffered a brief issue with his Carlin chassis as his mechanics took off the engine cover to work on the problem as the rain clouds darkened over Spa-Francorchamps.

Dan Ticktum didn’t take part in the Practice session after an inclusive COVID-19 test with the Brit awaiting a retest result.

Schumacher’s session came to a crawl as the German looked to have had an issue with the rear of his PREMA car. In seventh place he returned to the pit lane to find out what the problem was.

With eight minutes to go in the Formula 2 Practice session spots of rain started to fall at Spa-Francorchamps slightly dampening the circuit although it wouldn’t make a major difference to the results.

The final five minutes of the Formula 2 session saw none of the top three able to improve their times with Shwartzman ahead of Tsunoda and Mazepin.

Drugovich, Daruvala and Aitken who had several issues rounded off the top six.

Schumacher was seventh despite an issue at Les Combes. Luca Ghiotto eighth, Louis Delétraz and championship leader Callum Ilott was only 10th fastest.

Marino Sato was 11th fastest ahead of Matsushita and Guanyu Zhou.

Christian Lundgaard could only manage 14th with the Dane’s ART teammate Marcus Armstrong a place behind him.

Vips was seventh behind Pedro Piquet with Roy Nissany.

Artem Markelov and Guilherme Samaia rounded off the timesheets for drivers who completed timed laps.

Alesi and Ticktum did not set one. 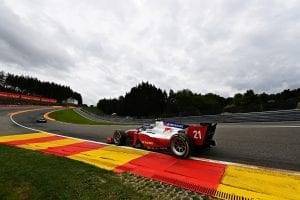